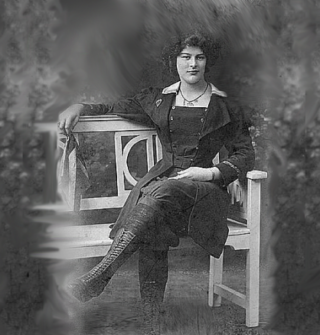 Dolly Shepherd sat down on a bench holding the silken Union Jack Handkerchief that she would use to wave at the crowds as she made her ascent under a balloon.

I found out about Dolly Shepherd in Aug 2015 by accident.

Her family home in new Southgate is no longer standing is now and is part of a main road.

At first I felt like I was hitting walls as not many local Museums/Archives/Councils in Hertfordshire/Enfield seem to of known about her or nor was she acknowledged officially in anyway. Although I have to say she is official recorded on the register archives in Enfield.

What an amazing woman she was, her story about how she becomes a parachutist is worth a play to be written or a film being made of and it was her job and one she enjoyed.

As the Harness Parachute was not invented then (she would go on to meet the man who would invent the prototype harness parachute), all you had was the hot air balloon or gas filled balloon, a limp parachute attached to the balloon (once released, you had a fall 250 feet before your parachute opened) or you travelled via a hot air balloon basket before you made your descent, then a trapeze bar which you held on to with both hands and a sling near your legs to take your weight and no breathing aids.

If your chute did not open properly you could fall to your death and many died or like what happened to Dolly one time, when her chute did not detach and open and she drifted for 6 hours getting higher and higher, until the balloon descended back down to earth by itself.

There was another time Dolly travelled up to 18,000 from being so high her nose started to bleed.

Dolly is the Guinness World Record Holder for the first mid air rescue, where she had a terrible accident which paralyzed her, she was tested on her back and legs with very early electric shock treatment which was successful and when she learned to walk again through grit and determination, she then returned to work parachuting after 8 weeks at Ashby De la Zouch, a place she loved and was loved and is still remembered fondly to this day, she was very much a celebrity in those Edwardian days.

She took part in early hand gliding experiments. There is a painted mural of Dolly Shepherd at The Alexandra Palace.

She even had a restaurant named in her honour in Monmouth, Wales, home of the famous Aviator/Motorist Charles Rolls, who she had met as due to her Parachutist work, she would also meet other early aviators including Geoffrey de Havilland.

I started writing about Dolly Shepherd on my blog ElizaDoesLots since August this year and was contacted by an American Museum for Famous Female Aviators and Astronauts and also an author who wanted to write a Children’s book on Dolly Shepherd.

Her Great-Great Niece is an actress and has written a post for a blog based in East Sussex, which is an interesting read.

Very recently, on the 17th of November, I spent a day at the at the Research Room at the Imperial War Museum listening to recordings of Dolly Shepherd talking, it was amazing to hear her talk about her life.

Her book ‘When the Chute Went Up The Adventures of Pioneer Edwardian Lady Parachutist’ is amazing (pub 1984 and now out of print) – I would suggest you invest in a copy via an online shop esp. the 1996 edition. She is also in a Blue Peter book from 1985 and is written about by universities, bloggers, in books, parachute societies, groups and clubs.  Her story will be featured on the BBC TV show Antiques Road Trip next year via the Ashby De la Zouch Museum.

Her daughter Molly Sedgwick was very proud of her mother and invested time in the book and would give talks on her mother’s life and Molly Sedgwick went on to do her first parachute jump (I might add with a harness) late on in her life.

BBC Radio4 has a radio play on Dolly’s life with Molly talking about her mother in the first part and Dolly is part of the BBC Trailblazer’s website and let us not forgets her work in World War One as a Female Drive & Mechanic in France.  The women were not welcomed at first, however they soon showed their mechanical and driving expertise’s, worked long hard hours and were valued by many.  She also gets married during this time to Captain Sedgwick, who although at first objected to having a woman as a driver after getting to know Dolly,  their friendship would grow and he would go on to be her husband.

For me listening to her talk about this time in her life, it was bitter sweet and funny sometimes in many ways as she really set the scene for her life in France as it was then.

Also there is her work during the Second World War, to be remembered and is done so by the Local History and Archives Centre, Lewisham where she lived during that period in time.

Please let us not forget this daughter of Potters Bar, Hertfordshire and resident of New Southgate.

Dolly Shepherd should be officially celebrated and remembered.

Personally I would like to see her name at least to be official noted, would it seem a step too far to say maybe a plaque on a wall, like a named room in an official Hertfordshire Building like a theatre, which would be rather fitting considering her entertainment career or a Council Office room or even a Library.

Yes I know a bit far-fetched, but why not?

Ashby De la Zouch has a whole set of housing stock named the “Dolly Shepherd Close LE65” in her honour and when the name for the ‘Close’ was to be selected from the final THREE, Dolly Shepherd was the only female on the list, so personally I think a small plaque is really a small asking.

Who do we need to write to about these things?

Thanks for letting me tell you about Dolly Shepherd and there is so much more to say about this wonderful Hertfordshire Hidden Heroine. I will have to save it for another day!