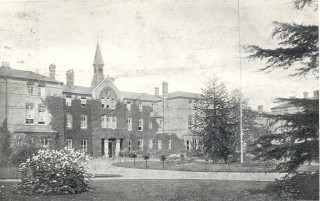 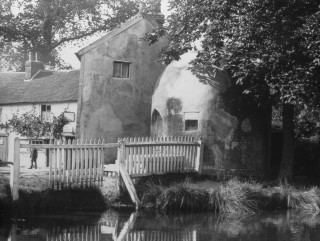 I was born on the 14th January 1896 at Shenley in Hertfordshire, England, and when I was three years of age went to live at Leavesden, Herts, where my father took a pub, The Gander.  There were three pubs at Leavesden, and our pub was near the St Pancras Schools and the Leavesden Asylum, almost halfway between Watford and St Albans and about eighteen miles from London.

I started school when we went to Leavesden and I was three years of age.  The Leavesden County Council School was the only school I can remember going to.  I done alright at this school and did not miss a class.

Just after I turned eleven, in April 1907, my Father, Alfred James Gravestock, told me he wished me to go for my leaving certificate, as he wished me to assist him in the business.  By this time, he was not only the licensee of The Gander, but had several sidelines.  He used to buy up all the Orchards between Watford and St Albans, gather the fruit as it came ripe, and sell it to the shops in Watford and St Albans.  This was in the summer, and in the winter he used to buy up the under-wood and have it cut into Basket wood, peasticks, faggots etc.  He was also doing a fair amount of horse dealing, pig breeding and market gardening, employing quite a number of men.

By this time, I was becoming very useful to him, assisting him in the orchards.  Also, I was quite a good rider and driver, and was a good shot.  I was using a double-barrelled, muzzle-loading gun to keep the birds off the fruit.  I had a gun licence and could clean and load this gun, and very seldom missed a shot.

I advised the schoolmaster that my father wished me to sit for the examination, and he seemed pleased and said he would give me some homework to help me get ready for the exam.  About a month later, I was informed that I had passed the leaving examination from the High School at Watford.  I finished school early in June 1907 and was immediately employed by my father in the orchards, delivering fruit to the shops in Watford and St Albans.

Whilst at school, I was good at soccer, cricket and also a good runner, and taught to fight by my Grandfather, who was known as Old Jimmy Gravestock, the bare-knuckle fighter.  I think his longest fight was thirty-seven rounds.  I saw him win a fight when he was almost seventy, his opponent being twenty-four years old.  He saw me win a fight when I was fourteen, my opponent being thirty years old.  These were bare-knuckle fights.  My grandfather was head keeper for Lord Clarendon for many years.

When I was seven, I joined the choir at All Saints Church,  Leavesden, and was taught to sing by a Mr Treen, choirmaster.  The church was at Garston, Herts, and within four years I was top of the choir.  About 1907, I remember being picked out to sing Abide With Me at the head of the grave of Mrs Evelyn Wood, the author of several books, when she was being buried in her husband’s grave at Garston Churchyard.

I have a photo taken in this choir.  I was also picked to in the Leavesden Asylum Attendants Minstral Troupe, and sang as a Minstrel at Watford and other halls at Leavesden, to raise money for injured footballers and other charities and deserving causes.

I had to leave the choir when I was twelve, as by this time my father had many interests besides the pub.  I was working sixteen to eighteen hours a day in either the orchards or the woods, riding, driving or delivering fruit or market-garden produce to the shops.