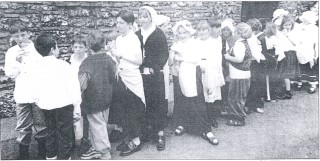 Wareside Primary School, previously a Boys boarding school founded in the 1700s, was founded as a mixed school in 1872 in the small village of Wareside. It was a small school with just over 80 pupils. The Church of England school is still open and running today.

It is clear that the school was similar to the Modern day Wareside, in a number of aspects. For example the holidays given to students and staff are very similar, as back in the nineteenth century there were still Christmas and Easter holidays. There was also the usual 6 week summer holiday, however these were not usually to let the children relax, rather to allow them to work for the harvest season.

And yet, the past and present schools also differ in a variety of ways. They claim, in their log books to be open 8 to 10 times a week most weeks, presumably counting morning and afternoons as different opening times. Even more different is the fact that the school was specifically catered for the needs of staff, rather than the students. Holidays were regularly permitted at the staff’s convenience so that they could attend events such as the festival of Standon.

The reasons for absence given are often the obvious sort, which we may still expect to see today; children develop illnesses such as measles, influenza or a simple cold. However, other stranger reasons for absence are ones far from what you would expect to see. For example children would be unable to attend school due to their being required to help out at home due the absence of an older sibling, or often to work in the fields to feed their hungry families. At times, students were unable to attend school (and sometimes the school was even closed) due to the bad weather. And this was not necessarily down to heavy snowfall, but often as a result of storms or even just showers of rain. Poorer children may have only been able to afford one set of clothing and were unable to get it wet, or else they would have nothing to wear the following day, so they had to stay at home when it rained. Needless to say there were very poor levels of attendance throughout the late 19th Century and even into the early 20th Century.

As well as being taught seemingly ordinary lessons in school (geography, reading and needlework for the girls) younger students were often given ‘object lessons’ which had been formerly approved by the government. Records show that these included topic lessons on a variety of things from farmyard animals to cottage gardens and grass! Students were also taught to sing and recite poetry, and visitors to the school were often treated to a performance from the children.