Air raids and food production affected the daily lives of many Hertfordshire children.

Fundraising and support for the forces

Calls upon children’s pocket money continued.  Having collected from Digswell school in December 1916, Mrs Chambers returned in January 1917 for a further collection for the Red Cross.[1]  The Red Cross also received money from the Victoria Road Girls school, East Barnet.[2]  On 13 November, J H Marchand, Esq. JP. visited the school to thank the girls for the £1. 12s. 9d. donated.

The school was also engaged in making practical items.  The Log book recorded on 20 February that: “a large parcel of knitted garments made by the girls has been sent by rail to the Surgical Depot, St Albans for our soldiers and sailors“.

The boys at Ayot St Lawrence school were also busy.[3]

“18 Oct 1917 – “The articles made by the boys in the woodwork class were sold today in the village. The proceeds were given to “Our Day” fund“.

17 November 1917:  “The splints which had been padded by the children of the top class were returned to the Technical School at St Albans“.

At the Victoria Road school, in January 1917, it was noted in January that Mrs Cooper was not able to be at school as she had gone to Bristol to see her husband who in the military hospital there.  In May, Miss Cole was given two days holiday to spend with her only brother who had come home from Canada after an absence of 15 years before going across to France.

Another visitor from Canada was at the VAD hospital in Welwyn.[4]  The Bengeo school recorded, on 22 June 1917 that:

“Mr Johnson, a wounded soldier now at the Goldings Relief Hospital and formerly a Canadian school master visited the school this morning to see the ordinary working of the school“.

“Attendance very poor on Monday morning. 60 children away owing to Raid on Sunday“.[5]

Air raids continued into 1917.  At the Victoria Road school, Barnet:

14 June 1917: “Girls were dismissed early this afternoon because intimation of an air raid was received from the Police”.

15 June 1917: “Desk drill taken throughout the classes so that the girls can now get quickly under the desks and be protected from falling glass“.

This may have been timely as at Monken Hadley Infants school:

Another raid in East Barnet at lunch time on 2 October resulted in “a small attendance this afternoon, 100 girls only being present.”.

There was some cold weather that spring which was recorded at Monken Hadley Infants school:

“2 April 1917:  “A very heavy fall of snow.  Registers not marked as there were only 4 present in the morning and 5 in the afternoon“.

4 April 1917:  “Very bad attendance during the week.  Many children ill – others unable to cross Hadley Green on account of deep snow“.

In spite of the slow start to summer, there was a harvest.  Children, particularly the boys, were needed to gather crops whilst domestic subjects were a matter for the girls.  At St Andrew’s School, Hitchin, for example:[7]

“20 June 1917: “The attendance has been very poor all the week, so many children absent picking fruit“.

5 October 1917: “Several absentees all the week working in the fields”.

12 October 1917: “The attendance shows very little improvement this week, many children getting roots“.

On the same date, it was recorded at Digswell that the school had closed for two weeks for the potato harvest.  At Little Amwell, the boys were given some recompense.  The parish council noted that Mr Barnes, the school manager, reported a balance of £1.5s.7 ½d.  from labour of boys on the allotment, after expenses been distributed to them.[8]

Management of food was another priority and at Bengeo:

“23 July 1917:  “The children did not have Household Management on Friday so are having it today to enable some of them to enter for the War-time Cookery Exhibition at Hatfield“.

25 July: “Gertrude Hills received a special prize for best pudding on the children’s stall and Nelly Crow 1st prize for vegetable soup at the Exhibition mentioned above.”

There was some fun.  A regular record throughout the war from Monken Hadley school: 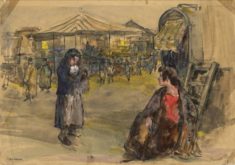 Note:  Over 300 log books and 130 admission registers for Hertfordshire schools are available to view digitally on Find My Past.  The records have been indexed by name and include pupils, staff and visitors to the school.