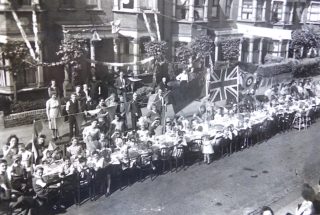 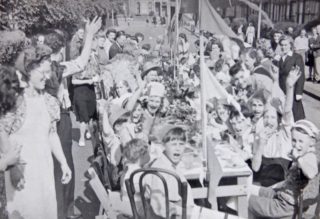 I was born in London living there until 1967 when we came to St. Albans, this is not therefore a memory of St. Albans but of Allison Road Harringay (the original spelling).

We lived in Allison Road, bordered by Green Lanes at the bottom and Whiteman Road at the top. The road is the steepest part of a ridge that runs north to south with an alley through the middle. Living at the bottom we were on the flat part, there was another flat part at the top.

The street party could not be held on the slope so was held in two places on the top flat part and the main party outside our house No 110. I was about four and a half and can still remember the party because we children were allowed to stay up late and there was a lot of cake and nice food to eat. Rationing was still in place but mums had saved for weeks to ensure that the party was a great success.

My uncle was home on leave and took the two attached photographs, sadly I do not have the negatives. Of course hostilities continued in other parts of the world but for us, or rather our parents, the war had ended. One thing I must add is that I can never remember being afraid, I think as children we just did not fully understand what was happening and luckily no bombs fell near us although there were anti aircraft guns in the local park.