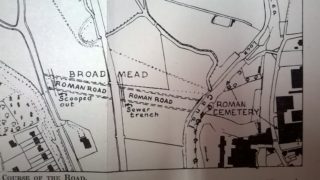 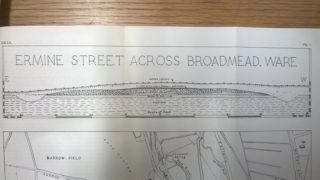 Diagram of the layers of material within Ermine street 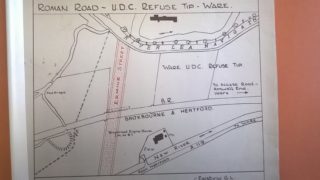 diagram of Ermine street across the railway (see red lines) 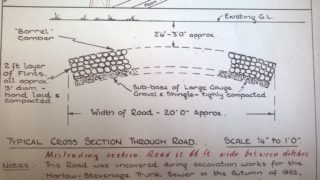 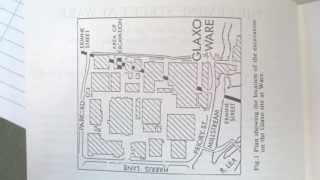 Location of the excavation on Glaxo Ltd. site 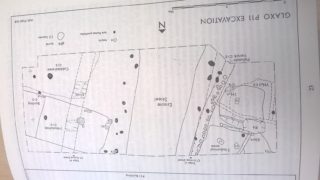 My week at the Hertfordshire Archives and Local Studies allowed me to research into the archaeology surrounding the area that I live, Ware. Who knew I would discover that one of the largest Roman roads of England crossed through the railway which I take everyday?

What is Ermine street?

Ermine street is a Roman road that runs from London, to Lincoln, and York; totaling a length of approximately 192 miles! In relation to Hertfordshire, the street passes through various locations such as Ware, St. Albans, Braughing, and Baldock; however this article will be focusing on the former, Ware, in relation to Ermine street.

Just over 200 yards West of Ware station, this section of Ermine street crosses the marshes of River Lea.

However before 920 AD, the only waterway which passed Ermine street was the natural River Lea; which today takes its course as what we know as ‘Manifold Ditch’.

The discovery of Ermine street in Ware

It is June, 1951. In the effort to make an anti-flood bank alongside the New River, a shallow removal of turf and soil is made; exposing a piece of road.

A year later, in September 1952, a trench for the new Stevenage sewer is made across the line of road; thus creating a small strip of the buried road accessible to examine, done so by J.M.Page and J.R.W.Whitfield.[1]

There had been previous discoveries of Ermine street, such as in 1902 when traces where found in the Chadwell golf course; however the road had seemed to be lost from that point onwards, until the emergence of this section across Broadmeads.

What materials were used to create the street?

Why was Ermine street built this way?

The width of this street in the section examined comes out as 65ft; an impressive size…but why?

Those examining found that the road actually was split into a three-way; the centre at 24ft was found to be made of a harder and flatter surface, whilst the sides at 20ft each appeared to be softer and sandy. As for the purpose of this division, main Romans roads would use the centre as a carriageway for traffic, either wheeled or on-foot, and the sides would be for travelling cattle and horses.[1]

Logically, then, Ermine is built as a three-way due to its significance as a main Roman road; running through important destinations such as London where the capital and seat of government is located. Equally, a road of such size is needed for crossing marshy and low-lying ground.[2]

So, what has been excavated on Ermine Street?

Various excavations have been made along Ermine street in Ware such as:

However, perhaps the most notable excavations involve the site under Glaxo Ltd. (formerly Allen & Hanburys). From time to time, archaeologists get given the opportunity to study the details of Ermine street; from its structure and traffic, to the kinds of trade and settlement that it attracted.

Why? Construction of a new warehouse block at Glaxo Ltd. allowed the Archaeological Trust to cut a trench along Ermine street to examine its settlement on either side. To see the overall layout of finds see the images to the right.

Conclusions: Since being a military highway, Ermine street has always had importance as a trade route. The development of buildings along its side, and the concentration of activity seeming to line the road indicate fierce commercial competition; attempting to attract travellers and passers-by (thereby affecting the free-flow of traffic along the road). This activity appears to be continuous throughout the 1st and 2nd centuries AD, in the form of small workshops alongside the street. However, the limited area of excavation given prevents us knowing how far the settlement spread.

The whole network of main roman roads was constructed during military advances between 43 – 81 AD; and during this period was when such roads were constructed in the grandest possible style.[4]

Some interesting aspects of these roads to note:

We now know how Ermine street was constructed and discovered, but why did Ermine street pass through Ware in particular? In order to answer this question, we need to look further into the origins of Ware as a Roman settlement.

After the Claudian conquest of 43 AD, the Romans built small towns and settlements in strategic places along the network of roads; these roads were being built by the Roman military administration as legions moved North and West, taking over Britain. In the initial stages, most settlements would have had a purpose for their construction, and would be occupied under military rule.

Does this criteria fit Ware? Considering its location, yes! Ware is about 20 miles from London, which is the right distance for having an ‘Imperial Mail’, or more specifically a ‘Roman pony express’; essentially a destination to change horses and their riders.[5]

Equally, the military presence would have attracted particular types of people – traders, artisans – and particular kinds of construction, such as inns and lodges.

Overall, it appears that Ware was passed through by the main Roman road Ermine street, primarily due to its location; 1. its distance from London was suitable enough for implementing Imperial Mail, and 2. its location directly above London, where Ermine street originates, suits the direct path which most Roman roads take; so therefore happenstance by location caused Ermine street to cross paths with Ware.

On a final note: Thank you so much to the staff at HALS for making my week of work experience so enjoyable and useful; and thank you Emma Pearce for organising it!