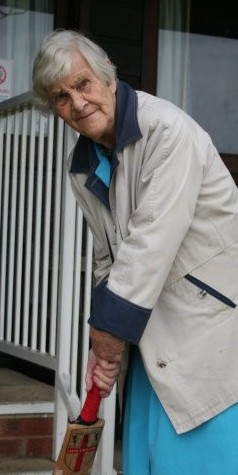 She played both cricket and hockey for local clubs well into her later years. Audrey was a member of Soroptimist International St Albans and District Club for 38 years, joining in 1972 and was President in 1978. On Audrey’s 90th birthday she was was thrilled to be presented with a cricket bat signed by the England women’s team. Audrey was always telling us how lucky she was to have had such a wonderful life, and we can only say how lucky we were to know her.

Audrey was a famed player and administrator who championed the cause of the women’s game through the Women’s Cricket Association (WCA). She was one of the first 10 female members admitted by the MCC, when it voted to allow women to enter the Long Room in 1999.

Audrey was born in India in 1915, her father was killed in the First World War, and her Australia-born mother decided to bring her three children to England in 1920. Audrey played in her first women’s cricket week aged 12, and went on to read Chemistry at the University of London. She represented a number of women’s teams, most prominently Middlesex women and South women, before playing her one and only official Test against Australia in the 1937 Ashes. In the drawn Test at The Oval, Audrey scored 27 in the first innings batting at number eight. She put on 54 in half an hour with Betty Archdale, after the pair were told to “get on with the job!”

Audrey moved to St Albans after the Second World War, played for the East and became secretary and later chairman of the WCA for six years. Her term as WCA president, from 1983 to 1994, was the longest in the history of the organisation, which eventually merged with the ECB in 1998.

All of Audrey’s work for the WCA was on a voluntary basis, and as such, she is credited with steering the WCA through lean times, and helping to lay the foundations for the healthy interest in cricket amongst women today. In later years, Audrey was best known in the cricket world for her services to various chocolate firms in her unstinting efforts to raise funds in continued support of women’s cricket.

After her death the England team, on tour in India, wore black armbands during the second one day international and both teams observed a minute’s silence in her honour before the game.
The following tribute/memorial appeared on the England Cricket Board website:

“Bless you Audrey, you are very much loved and missed by your fellow players at Radlett Cricket Club (Vagabonds). We have all benefited from your commitment and your love of the game.

Your scorebook was never to be forgotten, even when you used light yellow pencil too. We have lovely memories of your last indoor game with us in 2007, batting, you tripped, the hall went silent, you picked yourself up to run again before the ball reached the stumps. If only other were made of the same stuff Audrey! We won the indoor league this year – and dedicate that win to you.” Michele Verroken, Radlett CC.

Audrey was founder of Radlett Women’s Cricket and is picured above at the Radlett CC in 2007.Thanks to Radlett CC for the image and most of the text above http://history.radlettcc.com/audrey-collins-1915-2010/
More about Audrey Collins as a Member of Soroptimist International St Albans and District
The “Soroptimist Audrey Collins Hertfordshire Girls under 13’s” cricket league competition is sponsored by the St Albans Soroptimists as a lasting legacy to past member Audrey Collins who died in 2010.

Audrey was an inspirational Soroptimist – a pioneer of Women’s cricket and a trail blazer for women.

A coaching programme for female coaches is also being created from the £1000 legacy Audrey generously left the Club.