A letter to The Times 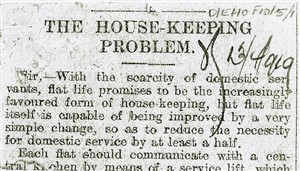 “… the system does not involve any surrender of the individual home.”

Ebenezer Howard, Urban planner and Garden City founder addressed the problem of domestic service in a letter to The Times in 1919. As more people were living in flats he suggested that each flat shoud have a service lift which could communicate with a central kitchen and that any other services, such as cleaning would be an optional extra. His idea was meant to save energy, labour, space, fuel and food.

He refers to the system being put in place under “co-operative housekeeping” through the model village built as part of the Daily Mail Ideal Home Exhibition at Welwyn in 1922 which demonstrated the latest house-building techniques to local authorities. Some of the houses survive today and one even boasts an original laundry shute in working order.