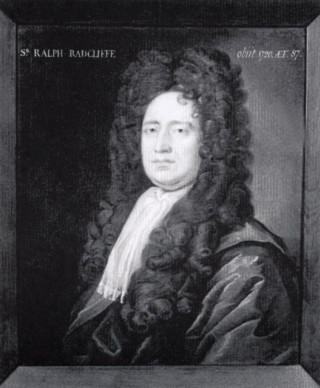 Ralph was born in 1633 and inherited the Priory from his uncle in 1660. He was knighted in 1668 and was married three times, outliving all his wives. Sarah Gully, his second wife, was a wealthy widow of a London merchant and Sarah and Ralph built the front of the north range of the Priory as we see it today.

Ralph had only one son called Edward by his first wife Anne. In order to provide for Edward’s prolific family (five sons and a daughter), Ralph ensured that they had to work for their living. All of the sons (and two grandsons) worked in turn in the family business of Levant traders. This was a prestigious trade from which they acquired a considerable fortune. They met wealthy and influential people and moved in the highest circles. The family had a London house in Devonshire Square from where the business was managed.

Ralph died in 1720 and £100 was set aside in his will for a monument to be erected. This memorial can be seen today in Hitchin church, dominating the East end of the church to the right of the altar. It declares of Ralph:

‘Having improved his great natural genius by travelling into the most polite countries of Europe, where he gained a perfect knowledge of the world, at his return home he preferred the peaceful exercises of a rural life to the splendour of courts and cities.’