You are here: Home>Herts history>Topics>Crime>More additions to Hertfordshire Names Online 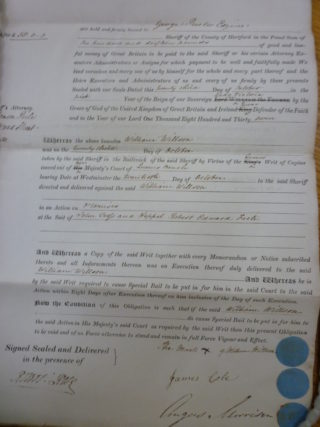 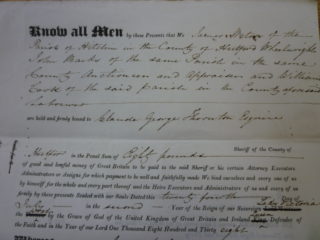 The Westminster Bail Bonds (HALS/SH14) provide another source for family historians and also anyone who is interested in litigation in the early years of the 19th century. The bond has the name, occupation and abode of the defendant and those standing surety with the bonus of their signatures, thus providing another check on the spelling of names.

The Sheriff was responsible for the arrest or bailing of persons summoned by a wide variety of writs to appear in one of the courts of law at Westminster.   Upon receipt of a writ, the defendant would be arrested and a bail bond entered into between the defendant and the sheriff, the penal sum, assured by 2 sureties, being the equivalent of the debt or damages claimed – the defendant undertaking to appear in court on the date stated.

The “offence” was usually a matter of ownership of goods, property or money and described in legal terms.  The most commonly used term was “Trespass”, defined as used for wrong or damage done by one man to another.  Most cases probably involved taking of goods belonging to another.  A few were classified as “Trover”, an action by one against another about the ownership of goods/ possessions and some as simply as “Debt”.

Those named came from a wide section of the population.  George Thomas Lyon Bowes, also known as Lord Glamis of Redbourn, was called several times in 1826 but many were in trade.  Some had an entry in a trade directory but the bonds provide information where the individual had not submitted an entry or the “trade” is not relevant to the directory,  Farmers, Yeomen and Gentlemen being prime examples.  The bonds also reveal some unusual occupations such as George Blow, a currier (horse groom), from St Albans, William Twaddle, a slopseller (seller of ready-made clothing) in Hertford, Edward Bone, a cow leech (veterinary surgeon) of Bushey and Ephram Theobalds, a castrator from Broxbourne.

Typically those standing surety would appear to be family members or fellow trades-people but some names occur frequently such as George Jackson and John Marks, auctioneers in Hertford and Hitchin.  More intriguingly, William Cook, described as a labourer from Hitchin, is another.  He stood surety for many around the county such as Archibald Campbell, a gentleman from Northchurch, Patrick Giraud, a grocer form Rickmansworth and John Bishop, a gentleman from Bushey.

The link to hertsnamesonline is here.

The names can be found under the Crime and Punishment category.