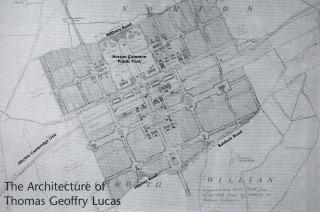 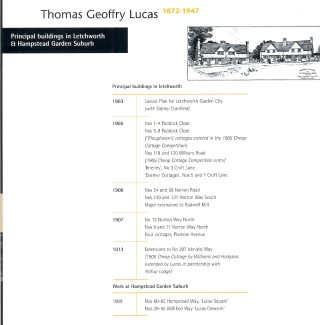 Lucas with E.W. Mountford (known for his Baroque town halls and law courts) won a design competition for the new Hitchin town hall. Mountford also proposed that he joined the RIBA Associate Membership.

In 1903, Lucas was commissioned to design their “ploughmen’s cottages” and made a reputation in housing design. He was Hon. Secretary of the Hitchin Society of Arts and Letters, a member of East Herts Archaeological Society and ecclesiastical surveyor to the diocese of St Albans all of which showed his great interest in historical places, particulary churches. He restored a few churches and prepared the historical plans of many. During the war he worked for the Ministry of Munitions housing scheme. He worked with Henry Vaughan Lanchester after the war and eased into retirement in the late 1920s. In 1918 he married Katharine Maud Markham and had no children. He died in 1947 in Walmer, Kent.

Lucas and Cranfield’s entry for the designing of Letchworth Garden City was unsuccessful, their plan was to make the north and south side symetrical from the railway line. The station was planned to be east of a boulevard that led to the town centre piazza, lined with civic buildings all of this would have been called “Howard Avenue” it would also have a Victorian-style park “Norton Common” with a grand water feature. The housing layout seems to have been in quadrangles, few other details are given. The plan would have beem monotonous for the residents and a serious flaw would have been the division created by the railway and industrial area.

Lucas designed the cottages in Paddock’s Close are are appreciative of vernacular architecture and picturesque effect, including a “skirt and blouse effect”. No.s 1-4 had Yeoman Tudor oversailing caps, no.s 5-8, perhaps due to cost, were less elegant, they all cost under £150 per dwelling and won their class for grouped dwellings in the cheap cottage competition, setting an excellent standard.

No.s 54 and 56 Norton Road and 129 and 131 Norton Way South were also designed by Lucas in a vernacular style. Lucas also designed cottages in Croft Lane; No.s 3, 5 and 7 were all influenced by 17th and 18th century rural cottages. Whilst designing No.s 9, 11 and 13 (1907) in Norton Way North Lucas used elevations that avoided symmetry this time, this was done by treating the two halves of a semi-detatched house as a total composition, rather than using individual units to create individual identity.  A bay window with ornamental spandrels are typical of Lucas’ style.