You are here: Home>Herts history>Topics>South Asian Heritage Month>How Hertfordshire Responded to the Expulsion of Asians from Uganda

How Hertfordshire Responded to the Expulsion of Asians from Uganda 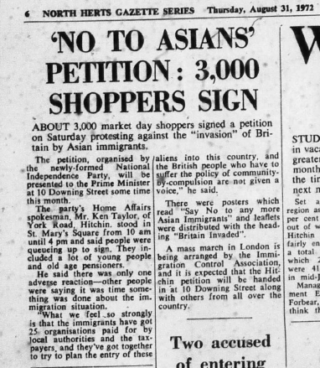 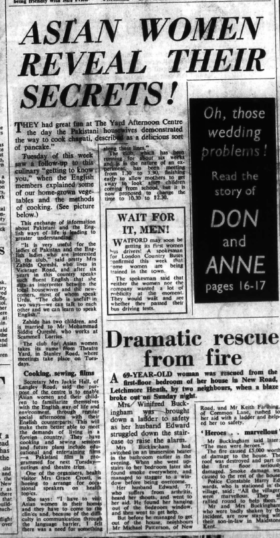 After the expulsion of Asians from Uganda was announced in August 1972, debate went on in the UK about taking refugees and whether local areas could sufficiently care for them. Around this time, rents had been raised by councils on social housing, completion of housing projects had fallen, and rising inflation and interest rates meant there was a real worry in the country on how to look after people. This impacted the willingness of local councils in Hertfordshire to take on refugees, as they had concerns about the huge waiting lists of residents for social housing that were already here.

In Hitchin, MP Shirley Williams argued that Stevenage should offer 50 houses to Asian families because they had a much smaller immigrant population, whereas people in Hitchin were already on a 3-year waiting list for council houses. Meanwhile, David Clarke, Conservative candidate for Watford, said that the town should not take on a single refugee because of the existing pressures on the social services there.

Other councils had fewer worries about the impact of the arrival of Ugandan Asians; Hemel Hempstead’s housing manager said that an allocation of 50 homes made over a period of time would have very little impact on those already on the waiting list, only increasing wait times by about 3 weeks. A suggestion was also made at the Hemel Hempstead public meeting on the matter that people with large houses could offer temporary accommodation to refugees for a few months whilst other housing was located.

The reaction of the wider community, as reported in local newspapers, was mixed. Manual workers in Rickmansworth said that a proposed scheme to house and employ 5 Asian Ugandan families was “racial discrimination in reverse” as previous manual workers had not been provided with housing. Meanwhile, in Hitchin, the National Independence Party created a petition signed by 3,000 shoppers in one day protesting against the influx of Asians to the country. On the other hand, one letter-writer in the West Herts Observer said that compassion was needed, rather than hatred and fear, and highlighted that the UK had a legal obligation towards the refugees.

In some parts of Hertfordshire there was a real effort to help refugees and the Asian community in general integrate with the locals. In August 1972, a group of women in Watford set up a club in Stanley Road for Asian women to help them to mix with local English women in order to exchange cultures and learn English. Many of the women were Pakistani, and in one newspaper report it was described how one week the Pakistani women introduced the English women to chapatis, whilst the following week the English women showed some home-grown vegetables and English ways of cooking. It was envisioned that going forwards the club would be a hub for Asian women in the area, and this would include any coming to the area as Ugandan refugees.

We are keen to collect any experiences from people who may have come to Hertfordshire as refugees from Uganda, as well as any other Asian immigrants. You can submit your stories which will be gathered together in this hub for posterity.