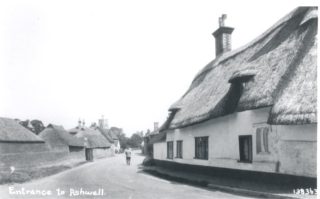 In all pre-modern cultures, it was expected of young people to marry and contribute to the community’s next generation, so finding the right partner was crucial. In some cultures, this would be for the parents to arrange, but whenever the decision was left to the young people themselves, courting was crucial. Courtship rituals grew up everywhere, and Hertfordshire was no exception.

An old rhyme, found in Hertfordshire and elsewhere, seems to put a restriction on courtship, proclaiming:

When the gorse is out of bloom
Then kissing is out of tune.

In fact, this is a joke. Various types of gorse bloom at different times of year, and there’s virtually no time when some kind of gorse isn’t in bloom. That should hardly be a surprise. Young people are going to court whenever they feel like it.

The day of the week seemed to have a bearing, though, at least in superstition. According to a rhyme, similar to the better-known “Once a wish, twice a kiss”,

“Sneeze on a Tuesday, kiss a stranger.
Sneeze on a Wednesday, sneeze for a letter,
Sneeze on a Thursday, for something better.
……Sneeze on a Saturday, see your sweetheart tomorrow….”

Though if you were sneezing that much, maybe you shouldn’t be trying to court at the same time.

Various traditional courtship words and phrases were used in Hertfordshire. When a lad was “coortin’ a gal” (and it might be said that “’e ain’t ‘alf got it bad”) the couple were “walking out” or “keeping company”, while if they were “talking” it meant they were getting more intimate. Eventually they might become “tokened” (engaged) and he’d give her a “keeper” (engagement ring).

Not that the couple always had a free choice about who they courted. In Weston, for instance, residents were encouraged to marry within the parish, in which case they were known as “Weston Partners”. Graveley was even more xenophobic. People there were referred to as “Graveley Grinders” because if a lad from Weston or any other “furrin” parish was caught walking out with a Graveley girl, his backside would be ground at the Smithy.

Ashwell, on the other hand, seemed to positively welcome new blood. A rhyme claimed that:

“The houses they stand thick and thin,
Young men there are a plenty.
Young ladies they can have their choice,
For there ain’t such a place in twenty.”

Given the risks of inbreeding in villages in the old days, perhaps the folk of Ashwell had the better attitude. Whatever the rules were, though, no doubt most young people courted the way they chose. As they always have done, and probably always will.