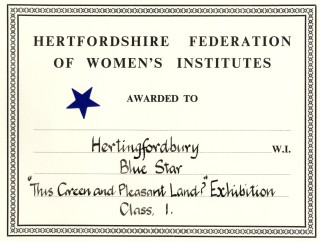 1965 was the 50th anniversary of the formation of the WI. The National Federation of WIs suggested that each institute made a scrapbook about their village and their own activities. These scrapbooks were then judged at county and then national level. Hertingfordbury was awarded a blue star certificate.

I must be the only remaining member of the committee who compiled the scrapbook. I collected information about the workforce in the village; my section of the book was called local trades. There were farms and Harry Shepherd’s shop – you could buy anything from him – brushes, paints, brooms, anything! Then there was the Wheatley garage and about four farms. There was also the village bakers: the Raymond brothers. We went to each individual and asked them to write out their own information about their jobs. The whole of 1964 was spent preparing the scrapbook so that it was ready on time. We covered the seasons, crops, flowers, the weather – everything that happened in the village.

I married Malcolm Wheatley and moved into the parish in 1961. In 1962, after having my first baby, I joined the WI. In those days it was very formal and members were addressed as Mrs Brown or Miss White, but over the years this formality has lessened and we now use Christian names all the time. I did hear about the scrapbook, but I wasn’t directly involved in the project. However, it was not very long before I was persuaded to join the committee and became more and more involved with WI activities.

I joined Hertingfordbury WI as a very proud member in 1954. Proud because I was one of ten out of the area members allowed membership. The meetings were held at Mayflower Place where they could only accommodate about 110 people, so the membership from the villages was about 100. The speaker on the first evening was a Mrs Body who told us how to dress well on a budget, and to accompany her talk gas lamps were pop-pop-popping throughout. My first job in the WI was as junior tea girl – and the fun we had!