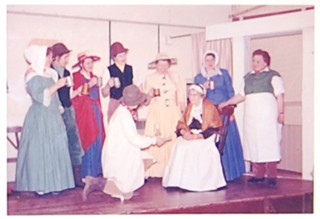 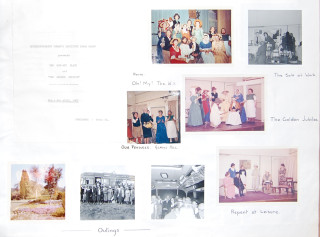 The Hertingfordbury Tennis Club was formed at a public meeting in 1961. In 1965 it had 51 members and despite the bad weather the court had been well used.

The Badminton Club was a small but enthusiastic group who meet during the winter and spring at Birch Green School.

Only one cricket match was cancelled during this cold wet summer; it was so cold at Aspenden on 29 May that players and officials retired to a blazing fire at the Fox to warm up.

Polo was played at Woolmer’s Park.

The Hertingfordbury Preservation Society was formed in March 1965. The main objectives of group were the preservation and protection of the amenities of the Parish. The main item for discussion was the proposed by-pass of the village.

The Recreation Ground is situated next to St Mary’s Church, Hertingfordbury.  The field was bought by the parishioners when the “Panshanger” estate was sold.  Each year a fete is held in June to raise money for the upkeep of the ground, also to help with any projects that are being carried out.  In 1965 it was the building of a new sports pavilion which was opened by Lady Bowes Lyon, Mr & Mrs Abel Smith and Mr Adams. The Fete always takes place on the 3rd Saturday in June.

The fancy dress parade for the children opened the fete and later in the afternoon children’s sports were held. Stalls included sweets, gifts, cakes, white elephant and jumble stalls. Teas and soft drinks were run by the Women’s Institute and a grand profit of £265.13.7d was made.

The membership for the year was 81 and the average attendance at meetings was 54. 1965 was the Golden Jubilee year of the WI movement and the production of a scrapbook was set to all Institutes by the Hertfordshire County Federation.Their President Mrs Wallace attended the Queen’s Garden Party at Buckingham Palace.

Apart from the preparation of a scrapbook, the Institute also raised money to buy a teak bench to present to the Parish and this was placed at Birch Green and handed over in July.  This bench is still at Birch Green and has recently been renovated and is looking as good as new.  An anonymous member gave a double-flowering cherry tree to be planted near the bench this too is still standing.

The other project carried out by the WI was the “Golden Jubilee” Handicraft Flower and Produce Show which was held on Saturday 18th September and was an open show so everyone could take part. There were two marquees on the recreation ground, one for the Fruit and Flower Classes and the other for Cakes, Preserves and Handicrafts; the new sports pavilion had been transformed into an ArtGallery. The show was a great success with 360 entries. The judges commented on the very high standard and suggested that they should hold another one next year. This show did become an annual event and carried on well into the 90s.

During the year, members ran stalls at the Recreation Ground Fete, lost a tennis match against Hertingfordbury Tennis Club, had outing to the Tea Centre, Warley Rose Gardens and Guildford. Interesting speakers included Miss Isobel Granger with her anecdotes of the unmarried mothers whom she helped, Gardens of the World, Care of the Hair, Let’s Give a Party. The competition is part of WI heritage and I would love to see the entries for January 1965 when the competition was ‘6 ways to keep a man happy’!  The Drama Group was in full swing entertaining and winning prizes throughout the county.