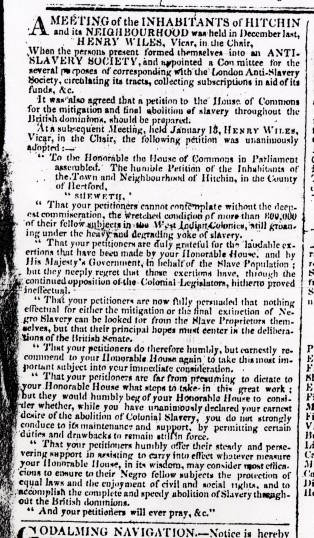 Hitchin was one of the first towns in Hertfordshire to set up its own Anti-Slavery Society.  Quakers in Hitchin had been involved in the Abolition movement since the late 18th century, when the first national society was founded in London by Thomas Clarkson and others.

‘For the mitigation and final abolition of slavery’

This report shows that a meeting held in Hitchin in December 1825, decided to form a local anti-slavery society, linked to the London Society. At a further meeting on 18 January, the society has drawn up a petition to the House of Commons ‘for the mitigation and final abolition of slavery’. It begins with the words:

‘That your petitioners cannot contemplate without the deepest commiseration, the wretched condition of more than 800,000 of their fellow subjects in the West Indian Colonies, still groaning under the heavy and degrading yoke of slavery.’