The Tornados at Waltham Cross 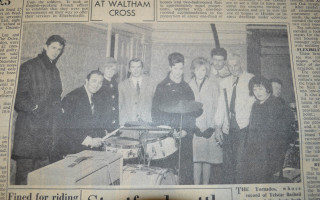 The Tornados, whose record of telstar flashed to the top of the charts both in this country and America, were a popular attraction at the Imperial Hall, Waltham Cross, on Tuesday night.

The Tornados, comprising three guitars, claviolene, and drums, played a lengthy session which featured all their top numbers, including the fabulous Telstar, which has sold over 2 million discs, and their latest recordsing which, although not officially released yet, has already sold a quarter of a million.

Despite the bad weather on Tuesday night, there was a large turnout of local teenagers to meet their musical pin-ups.

[Taken from the Hoddesdon and Broxbourne Mercury]