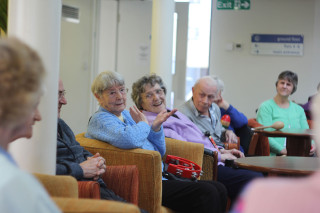 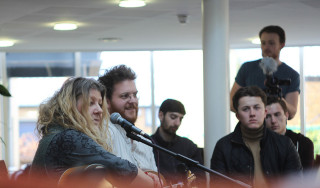 Hertfordshire Music Service is working in partnership with East Herts District Council and Riversmead Housing Association (part of Network Housing Group) to deliver a music and reminiscence project with a group of older people living in two residencies in Hertford.

Community Musicians Penni Walker and Ben Smith are running the workshops which explore people’s lives and memories through songs and film. One 93 year old recalled his time hop picking, while another told how he and his brother were left behind after all the other evacuees had been chosen. Memories like these will help provide the basis for new songs created with the participants. The project will culminate in a sharing event for family, friends and staff at Hertford Theatre on Monday 30th March.

The delivery of the project is also being supported by a talented group of five young musicians who are currently studying HND Musical Production at Hertford Regional College. The young people will be learning about career opportunities available in Music Workshop leadership, as well as how to write songs based on local issues.

You can find out more and follow the progress of Musical Memory Box by visiting the project’s webpage www.hertsmusicservice.org.uk/musical-memory-box