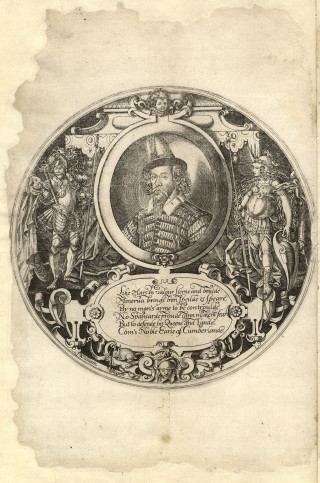 Frontispiece to the Earl's voyages
Hertfordshire Archives and Local Studies 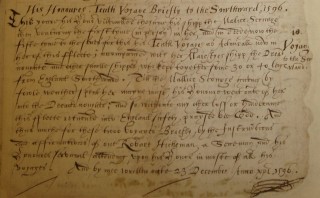 Part of the description of the Earl's 10th voyage.
Hertfordshire Archives and Local Studies

Although born at Brougham Castle in Westmorland his most formative years were spent not in the north but nearer to London and Queen Elizabeth’s Court. In 1569 he was sent to live with his aunt, Magdalen Dacre, at Battle Abbey. But within a year his father had died and at this point it was decided to place the young Earl with his future father-in-law, Francis Russell, at Chenies in the Manor of Rickmansworth.

In Earl Bedford’s household he was well provided for. He also had access to The Court and Parliament which gave him both entertainment and political know how. While at Court he had already met the mariner and explorer Martin Frobisher and had developed an interest in the wider world. While attending Oxford University George’s interest was further increased through attending lectures on navigation by Thomas Hakluyt.

His previous spell at Court had brought out not just a love of pleasure, but also a spirit of competition, especially with regard to the martial arts, and jousting in particular. As well as the high cost of providing armour, horses and the like, there were also debts to be paid, which resulted from the wagers that took place. As debts mounted George started to borrow against his estates. So much so, that at one point he was barely able to pay the interest.

In order to try and rectify the situation he turned to privateering. With many of his ventures he managed to cover his costs, but only two showed any profit. A voyage in 1589, a joint venture with Queen Elizabeth, was particularly unlucky for him: after capturing a ship with a cargo valued at £100,000, the prize was then lost in a storm before it could be brought into port. The result was that by 1591 he was still in debt to the tune of £6800 and selling property.

It is against this background that the voyages described in the documents held by Hertfordshire Archives took place. They are probably copies of the original accounts of William Myddleton who served under the Earl, and have come to Hertfordshire Archives by way of the papers of Sir John Witterwronge of Rothamstead who married Mary Myddleton the daughter of Sir Thomas, William’s brother.

One of the main aims of these voyages was to capture the large Spanish and Portuguese carracks trading between Europe and the West Atlantic ports and islands.   In order to undertake these particular voyages, (eleven in all) the Earl had borrowed yet more money to build the Malice Scourge, a large fighting ship of 600 tons. On the ship’s first voyage in 1595, he was unlucky in missing the much wished for prize. The voyage the following year was no better, being cut short when the Malice Scourge’s main mast was lost in a storm – a misfortune which was to be repeated during the voyage to the Caribbean.

You can read more about George Clifford and download a full transcript of his voyages by clicking on this link.