A memorial to a key volunteer 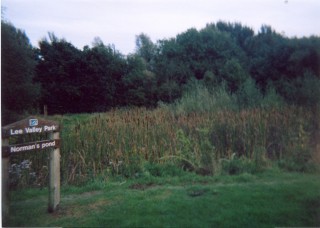 Exact location: Norman’s Pond, Fishers Green, RiverLeeCountryPark. If you park in the car park near the picnic area near one of the Lea Valley Farms, follow the footpaths sign just outside the toilets, the one that says Fishers Green overflow, follow the new footpath and  at the other end you will see this over- looked feature in the park. This pond has been in the park for a long time and you might find it on more of the modern maps of the park. This feature was named after one of the conservation volunteers who had passed away, his name was Norman Kemp. It was named as a memorial and a tribute as a way of remembering him. Before Norman died, he took an interest in the pond, it was   known as Norman’s pond even before it was officially given the name. I would like to give you a little background on the person who it was named after. I used to volunteer in Lee Valley Park for 2 or 3 years. I also did conservation volunteering. I used to work with a group of rangers and other volunteers, doing different types of jobs, such as scrub maintenance, planting trees, putting fencing up, etc. This was in Broxbourne area of the park, to be precise, the north end of the park.

A key volunteer in the park

I received the news on 20/09/2005 through a letter. The letter was to inform the volunteers of the death of Norman, it came as a shock. Norman was one of the key volunteers from the Conservation team working at Fishers Green and in the River Lee Country Park. Norman very rarely missed out a day in the field, giving many extra hours of his own time outside of organised events. He was always busy even when the rangers and other volunteers were on their lunch break.  Norman died on 13/09/2005. He had a heart attack. His funeral service was 1.30 p.m. at WalthamAbbeyChurch on 23/09/2005.

Rather than flowers, his wife Cyndi, did ask people if they wanted to make a donation to the British Heart Foundation, in his memory (as a result, I worked in a British Heart Foundation shop for 4 months last year. especially after I had also had a similar experience when my Mother was in Princess Alexandra Hospital, Harlow, Essex for a mild heart attack. I was proud to say I helped that charity for a brief time). On the day at Waltham Abbey church, the Vicar did a wonderful tribute and Service. I had learned Norman was born in Enfield, lived in Waltham Abbey most of his life. Norman met his wife in the workplace, where he used to work, supported Spurs. He was a nature lover, loved the park  itself. Norman took early retirement. He was 54 when he died, far too young to go –  he was 1 in a million. The Vicar said this in the sermon at the time.

I had trouble coming to terms with it. The service was low-key, no hymns, just a few prayers. My impression of Ron( Norman’s friend and fellow volunteer ) on that day was he seemed to be in a daze. I think that goes for everyone. When I was sitting in the church I was crying, this was at the point when LeeValleyPark staff came in. Norman had an excellent send off and I was touched by his passing.

I regret not getting a chance to know Norman better. I wish I had a chance to say goodbye to him the last time I saw him a fortnight before he died. He didn’t look too well then. I ended up getting a lift with a ranger and Stan. Before that, there were a couple of days Norman never showed up, it only clicked then, after his death.

We all miss him. I still talk to Stan if I see him; he was the longest serving volunteer. He retired a few years ago. I still see Margaret, another volunteer who used to come all the way from Southgate, North London. A big thank you goes out to them all.