A casualty of Passchendaele, 1917 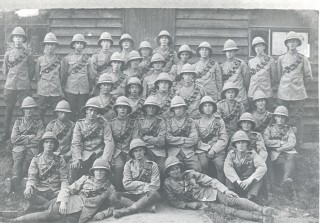 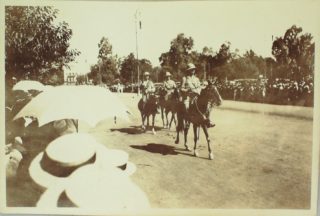 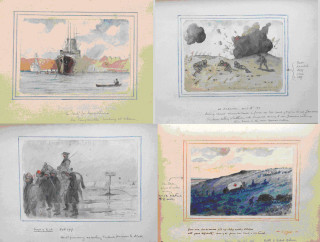 Watercolour sketches by C F Lock, which give a vivid insight into the conditions that were endured during active service in the First World War. C Lock served with the Hertfordshire Yeomanry, 1st/1st Regiment in the Western Desert, Gallipoli, Mesopotamia and Palestine, 1915-1919
Hertfordshire Archives and Local Studies, Ref: DE/Yo/2/13-16

A picture of how perceptions of World War 1 changed and the tragic loss of life can be seen in the experience of one family.  Algernon Villiers was the youngest son of Sir Francis Hyde Villiers.[1] He married Beatrix Paul,  the daughter of Herbert and Elinor (née Ritchie).  Elinor kept a diary for some 50 years and these volumes are kept at Hertfordshire Archives and Local Studies.[2]

Like so many other young men, Algernon was keen to join up in August 1914 but was rejected. As Elinor recorded:

“27 August 1914: “Algy at breakfast told me Captain Graham with whom he dined last night has settled the question of his volunteering as he explained how difficult the use of a rifle would be with short sight“.

This did not deter him and on 2 September Elinor received a letter from her daughter:

“I had the great shock of reading that dearest Algy went to Hertford yesterday and enlisted as a trooper in the Hertford Yeomanry and sails for Egypt on Sunday“.

(Further information on the Herts Yeomanry’s time in Egypt can be found in T Holland-Hibbert’s diary.

He intended to volunteer for Home Defence but the yeomanry were to release regular soldiers from Egypt. Clearly there was no danger as his wife, Beatrix, made plans to join him and the diary noted that:

28 December 1914: “Beatrix set off for Port Said via Paris and Marseilles“.  She arrived in January 1915 and was taken “to a nice doctor’s house. She is to be a paying guest there till they get married quarters together”.

In February Algernon was offered a commission in the Lothian and Border Regiment. Elinor’s concerns were more with climate than a sense of danger:

“I am sorry they should leave Egypt and be quartered at Edinburgh in bitter March weather “. On 9 April 1915 she noted that “Algy ceases to be a Lance Corporal in Herts Yeomanry and is gazetted 2nd lieut in the Lothian and Border Horse“.

In July 1917, Elinor received more communications from her daughter:

5 July 1917: “Letter from Beatrix saying Colonel Charterix has asked for Algy at once for the machine guns – so he is giving up on his much loved cavalry life for the more needed infantry“.

12 July 1917: “telegram from Beatrix saying Algy goes to Grantham tomorrow“.  A later note records “How one lives the moment. Little did I realise what Algy’s summons to Grantham meant”.

27 July 1917: “telegram from Beatrix telling me the dreaded summons had come “Draft tonight”“.

The diary entries for the end of the year include:

23 November 1917:  “Exquisite day – very warm with deep blue sky and lovely pearly clouds. A letter was forwarded to Beatrix from Algy.  All news excellent.  We are strengthening our gain on the Somme – in one day we gained half as much ground as we won in all the autumn fighting on the Somme last year!”

26 November 1917: “A letter from Algy written on Thursday cheered us for the moment“.

The dairy includes the extract:

His widow, Beatrix, was married in November 1919 to Walter Durrant Gibbs, son of the Hon Herbert and Mrs Gibbs of Briggens, Ware.  He inherited the title of Lord Hunsdon from his father and the barony of Aldenham from his cousin.  Beatrix died in 1978.

[1] Francis Hyde Villiers was the youngest son of the fourth Earl of Clarendon of The Grove, Watford.  From 1906 – 1911 he was Envoy to the court at Lisbon.  His predecessor in the role was Martin Gosselin of Hertford.

[3]  The full obituary in the 8 December 1917 edition is available in the Times Digital Archive, free to use for those holding a Library card. Link