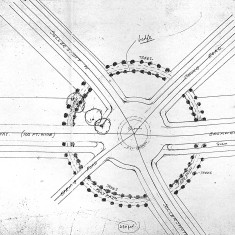 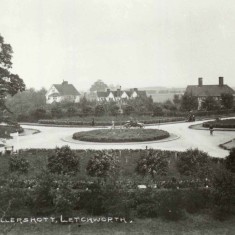 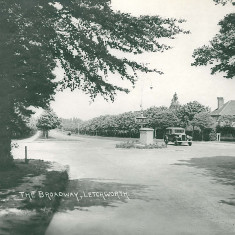 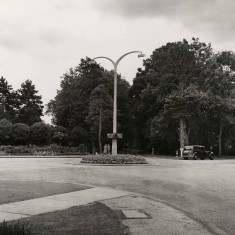 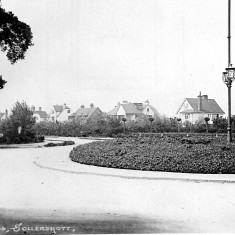 Visitors to the world’s first Garden City may find much to amaze them – from its beautiful tree-lined streets to its unique and fascinating buildings, but many are most amazed by a small unassuming circular traffic island, with a little wooden sign which proudly proclaims it as ‘UK’s First Roundabout Built circa 1909’.

No pun intended on the word circa – it was built around 1909!

In the original town plan of Letchworth Garden City drawn up in 1904 by Barry Parker and Raymond Unwin (the town’s two principle architects), there was a point which dissected 3 roads – Sollershotts East and West, Broadway, and Spring Road. At the point at which they all converged, Parker and Unwin drew up a detailed plan of a circular traffic island, ‘Sollershott Circus’, in July 1908.

There is some debate as to whether the first roundabout in the World was the Place d’Etoile (the eight-lane nightmare around the Arc de Triomphe in Paris), built in 1907, or Manhattan’s only roundabout, Columbus Circle, which opened in 1905. The latter bore no resemblance to a modern-day roundabout however, with motorists not required to slow down or give way on entering it, making it more of a ‘traffic circle’ than a true roundabout. Thus I personally go with the French option, not least because there have been roundabout-style junctions in France since the 1870s and the country contains more than half of the roundabouts in the entire world (30,000 as of 2008).

Despite being such a landmark in the history of traffic and planning, there seems to have been remarkably little fuss made at its inception. Whilst a correspondent to The Citizen in 1963, recalled the ‘opening’ of the roundabout in 1909, attended by a number of vehicles including buses from Hitchin, when he was “a boy of 9 or 10”, that same paper itself carried no news of such an opening at any stage between 1908 and 1910.

It was also not universally embraced by the motoring population of Letchworth. Whilst the Highways Bill of 1835 made driving on the left obligatory – leading Parker and Unwin to assume that drivers would follow the circus round in a clockwise direction – it appears that by 1921, drivers had still not got used to the system, much to Parker’s annoyance.

He wrote a letter of complaint suggesting that a sign be erected saying ‘Keep Left’. This was finally added in 1932, along with road markings and the central island being made smaller.