Pirton - a Village in Anguish 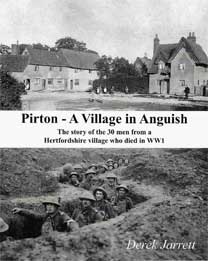 The stories of the 30 men whose names are engraved on the Pirton Village WW1 Memorial are emotive, tragic, yet heroic. They were called upon to do something totally alien to them – moving from a peaceful landscape to war.

Their lives before 1914, their war experiences and deaths are a testament to some remarkable men who will forever be part of the village’s history.   The War touched everyone in this North Hertfordshire village. In the final two years there averaged a village war death each month. It was a tightly knit community and loved ones and friends waited in anguish as these numbers increased; who would be next?

Various social and economic forces shaped the lives of these men, of which poverty, often aggravated by the size of the family, was central. In addition to the influence of parents and an intricate network of family links, the school, the churches and the employing farms were influential. The nearby town of Hitchin was increasing in importance; London, especially as a source of employment, was fast becoming significant.

You can find out more about the men who are remembered on the War Memorial in the book ‘Pirton, A village in Anguish’. With 97 pages, 90 photographs (33 in colour), the book is in large format, 200mm x 250mm. Copies, priced £9.95, can be obtained from the Pirton Local History Group or Hertfordshire Archives and Local Studies online bookshop.