A History of senior football in St Albans - Part 1 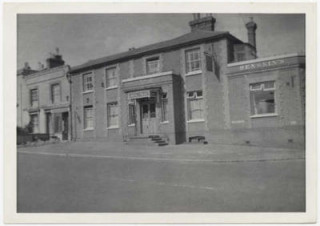 The original football club was founded in 1881 and was known simply as “St Albans”. Their headquarters were the Crystal Palace public house which stood on the corner of London Road and Lattimore Road. After an initial meeting was held it was decided to use a field situated off Hatfield Road known as “Reynolds Field”. The field was owned by Jacob Reynolds from Heath Farm. It is not known exactly where off Hatfield Road this field was but it is likely that it is close to the present day Clarence Park.

By the mid 1880s the club decided to move to a more central location within the city. The new ground was known as Gombards Fields which was owned by a Mrs Betts who lived at nearby Aboyne Lodge. It is likely that she had a connection with the club.

The St Albans club played friendly matches against other teams from Herfordshire as well as Bedfordshire and surrounding areas including North London. Teams such as Hotspur, who had only been formed a few years earlier, known today as Tottenham Hotspur. Luton Town and Royal Arsenal, forerunners of today’s Arsenal, played regular matches with the club.

They also played occasional matches on Bernards Heath after the cricket season had ended in September. Whereas the Gombards location is now built on Bernards Heath is still an open space. The next location for the club was the St Albans Grammar School field, known as Holywell Meadow, in Belmont Hill. This location has been built on inside the last thirty years or so.

The club were invited to play on the new Clarence Park pitch (See my article “Sir John Blundell Maple and Clarence Park). Between 1894 and 1898 the club played matches at the Grammar School ground as well as at Clarence Park.

In 1897 the club were invited to play in the Southern League. This was a very bold move because of the increased distances to away games. Matches in far away places such as Warmley, near Bristol, Wycombe, Maidenhead, Dartford and Chesham. In their first season the club finished a respectable 5th out of 10 clubs. There was competition from within the county when Watford Rovers, forerunner to the present day Watford club, joined the Southern League. They also started to play regular friendly matches against St Albans.

In their second season (1898-99) in the Southern League the club finished 8th out of 12 clubs. However, it soon became clear that the expence of travelling was taking a toll on the club. After two seasons the club pulled out of the Southern League. Of the active players only three were actually professionals.

In 1899, and within a few months, another club sprang up from the ashes of the Southern Leaguers calling themselves St Albans Amateurs.  This team played in the Herts County League from 1900 to 1904. They played most of their games at Clarence Park but a handful of matches were played at the Grammar School ground. In 1904 this club folded at the same time as another club came to the fore calling themselves St Albans Abbey. Some players moved within these different clubs as soon as the new club was founded. The Abbey team reached the finals of some local club competitions such as the Herts Senior Cup and the Herts Charity Cup. Sadly, for all of their local talent, in 1907 the Abbey club folded. It was obvious that it needed a good organiser to run a local football team properly.

George Wagstaffe Simmons was an administrator who had been on various committees connected with Hertfordshire football. It was he who set about rallying the people of St Albans with regard to setting up a new football club. Simmons was determined to run this new club properly and determined to learn from the mistakes from previous clubs.