You are here: Home>Herts history>People>Novelists, playwrights and poets>A King's Gratitude: The Memoirs of Lady Fanshawe

A King's Gratitude: The Memoirs of Lady Fanshawe 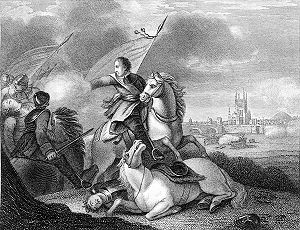 The sound of muskets thundered through the streets of Worcester. Bullets smacked into buildings and bone. It was September 3rd 1651 and the Battle of Worcester had turned into a rout for the Royalists. King Charles II’s attempt to reclaim his father’s kingdom had failed. Amongst the prisoners captured by Cromwell’s army was the diplomat and poet Sir Richard Fanshawe. Could his distraught wife Ann obtain his release from the Tower of London?

Sir Richard Fanshawe was born in 1608 at Ware Park. He was the youngest son of Sir Henry Fanshawe, an exchequer official. In the 1630s, he became the secretary to the ambassador to Madrid, where he started translating Spanish literature into English for the first time. He immediately sided with King Charles I at the outbreak of civil war in 1642. In 1644, he married his second cousin Ann Harrison. Although there was a seventeen year age gap between them, it was a love match. They were completely devoted to each other.

Thanks to his wife’s determination, his ill health and his agreement not to publish any political writings, Richard was released in 1652. The Royalist cause may have seemed lost, but Richard was able to continue his life’s work of translating Spanish literature at Tankersley Park, Sheffield.

With the Restoration in 1660, Richard expected to be substantially rewarded for his tireless dedication to the Royalist cause. He had suffered imprisonment, effective exile with Charles II and the confiscation of his ancestral lands. The personal cost to his family was also high: out of the fourteen children Ann gave birth to, nine would be buried in graveyards all over England, Spain and France. The Fanshawe family had invested everything emotionally and financially to the struggle against Parliament. In 1642, Ann’s father lent Charles I the then immense sum of £50,000. Various loans were made throughout the English Civil Wars by the Fanshawes. None were paid back. The gratitude of a king was not worth a single penny.