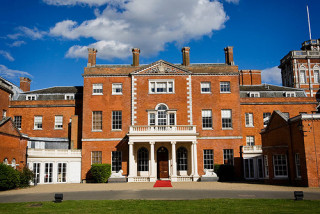 After the demolition of Theobalds Palace in 1650, under the Commonwealth, the estate descended through the Dukes of Albemarle and the Earls of Portland till it was sold in 1763 to George Prescott, who built a fine new mansion. Prescott, a successful banker and Member of Parliament, had travelled extensively in Italy in his youth, and the Italian influence can be clearly seen in many interior features, including the painted ceiling of the vestibule.

The estate was rented by the Meux family of brewers in 1820, and they eventually bought it in 1860. The family considerably extended Prescott’s original house, though at the cost of consistency in its style. The third and last baronet, Sir Henry Meux, married Valerie Susie Langdon in 1878. She had a chequered past – Sir Henry had met her while she was working as a hostess at the Venice Casino – and as Lady Meux she because a great entertainer, her house guests including Edward VII.

The couple were childless, and on Lady Meux’s death in 1910 she left the estate to naval officer Hedworth Lambton, on condition that he changed his name to Meux. As Sir Hedworth Meux, he became Admiral of the Fleet. After his death, the house was briefly and unsuccessfully turned into a hotel, after which it was used by the Royal Artillery, the Metropolitan Police, as a secondary school and as an adult learning centre. In the 1990s it became a conference centre, eventually reverting to its earlier use as a hotel, as the Theobalds Park Hotel, owned by the De Vere chain.

Its listing as a Grade 2* building (written in 1977 by Pevsner) describes it as “1763 for George Prescott, extended N and S by the Meux family in early and late C19. Red brick, Portland stone dressings, slate roofs. 3 storeys.” The description goes on to enumerate the interior and exterior decoration, noting a number of features in Venetian style, although it doesn’t mention the stone lions to either side of the main entrance, said to have been brought from Egypt.

Like most old buildings, Theobalds Park has had its share of claims that it’s haunted, or subject to other supernatural influences. A mummy that Lady Meux had in her collection of antiquities, for instance, was said to bring a curse on its owner, a reputation enhanced when it went down with the Titanic en route to a new owner. Reports of hauntings are claimed to have included footsteps, disembodied touches, objects moving, and a spectral form speculated to be Lady Meux. We can all make up our minds about how much stock we put on these accounts.

Theobalds Park may not be the most historically important building in the Borough, nor the most architecturally impressive. Still, it’s a fine-looking place, which is equally impressive inside (I’ve been to meetings there, though never stayed at the hotel) and, for a few decades, it was at the heart of high society, making it worthy of its Grade 2* listing.