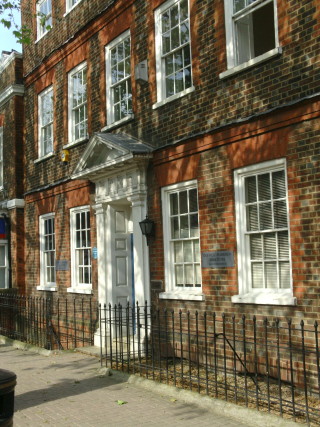 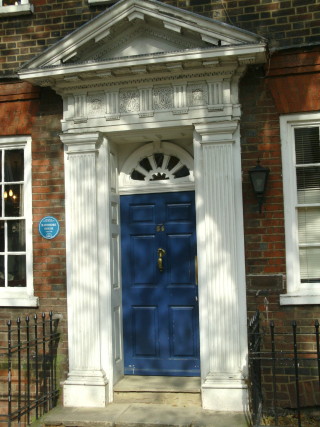 Standing at 56 High Street, Rathmore House has been described as Hoddesdon’s finest example of the Georgian period, reflected in its Grade 2* listing.

The current house was built in 1746, replacing an earlier building; previous tenants had included a Walter Fader in 1467.  It came into the possession of the Guardians of the Chapel and, after the former building collapsed in 1739, the land was leased in 1743 to John Borham.  He was a farmer, mealman and maltster, as well as owning the Lynch Mill, and is believed to have been the son of an earlier John Borham, who had built the Friends Meeting House in Marsh Lane.  Borham built a fine new house, a three-storeyed structure in red brick, with a fine Doric doorcase, above which are engraved his initials and the date 1746 in Roman numerals.

The lease passed in 1812 to Dr James of High Ground (later High Leigh), a doctor who had previously brought smallpox vaccinations to Hoddesdon, who became the first of a long line of doctors to occupy Rathmore House, leading to it being known locally as The Doctor’s House.  Subsequent doctors to practice from Rathmore House included Dr William Locke, a descendant of the philosopher John Locke, and Dr William Gosse.  Dr Gosse subsequently emigrated to Australia, and one of his children – a land surveyor – became the first European to climb Uluru, which he named Ayres Rock.

A later doctor was Dr Robert Stevens, who died in 1898.  H. F. Hayllar, in his 1948 book The Chronicles of Hoddesdon, recalled Dr Stevens: “I can just recollect his fine bearded figure, always immaculately dressed in frock coat and top hat, going his rounds in a brougham with coachman.”

Rathmore House remained The Doctor’s House throughout the earlier and mid twentieth century, until it was superseded by purpose-built surgeries.  It now houses the solicitor’s firm Duffield Harrison, and its Georgian elegance still stands out in a High Street full of historic buildings.