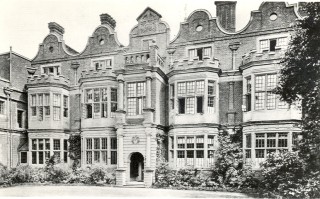 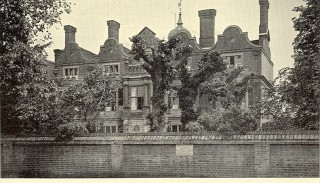 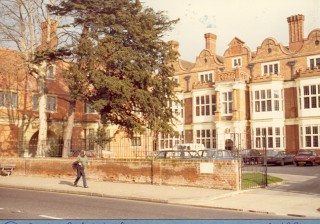 Rawdon House is possibly the most magnificent of the great houses surviving at the south end of Hoddesdon.  Threatened with demolition as recently as 1969, it’s now securely listed at grade 2* level.

What is now the east wing was built as Hoddesdon House by Marmaduke and Elizabeth Rawdon in the early 17th century.  The exact date is uncertain: a plaque bearing the date 1622 may or may not record the original construction.  The house was built of red brick, with a transverse hall and a stairway projecting from the rear; it may have been influenced by the recent construction of Hatfield House, since the Rawdons were acquainted with the 2nd Earl of Salisbury.

Marmaduke  Rawdon  built a water supply for the house, piped in from a site north of Lord Street,  also running a pipe to the town centre.  He also had a statue erected called the Samaritan Woman (also known as The Good Samaritan, Diana or a nymph with an urn).  The water was piped through the urn she held into a pool below, which was generally an improvement on the existing water supplies.

Rawdon was a master of the Clothworkers’ Company in London, but appears to have enjoyed the friendship and confidence of King James I, who visited Rawdon House on a number of occasions.  A summer house in the gardens was said to have been built at this time as a “smoking room”, to remove smokers from the presence of the King, who was vehemently anti-smoking.

The Rawdons fought for the Royalist cause during the Civil War, but kept the house through the Commonwealth period and appear to have still retained some of their wealth by the Restoration.  The house passed to the brewing Plomer family when, in 1734, Robert Plomer married Hester Rawdon, great-great granddaughter of Marmaduke and Elizabeth, and in 1751 came to their daughter, who had the unusual name Thermuthis.

From 1740, however, Rawdon House was occupied by a series of tenants, one of whom was John Dymoke, hereditary Champion of England.  It was bought in 1840 by John Warner, the Quaker and educational reformer, who rented it out to Sarah Stickney Ellis to run a girls’ school there, although the school moved to Finchley in 1865.

After 1875, the new owner, Henry Ricardo, commissioned a north wing to the house, built by Ernest George and Harold Peto, and from 1898 to 1969, it functioned as St Monica’s Priory, run by the nuns of the Order of St Augustine.  When the priory moved to a new building close by, the house was threatened with demolition, but it’s used now as offices.

Rawdon House isn’t open to the public, but it’s easy to see the west face, at least, as you pass on the High Street.  Take a moment to stop and look at a fine building that’s played its part in both local and national history.