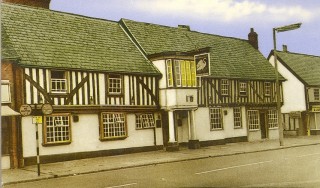 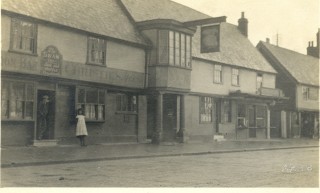 In the 1590s, a surviving document lists Hoddesdon as having at least thirty inns, and this may not have included alehouses and taverns, which did not provide accommodation.  The document, a reply to a complaint by the townspeople, identifies most of these by the name of the innkeeper, but five establishments are specified by name: the Lyon, the Bell, the Chekquers, the George and the Swanne.

Of these five, the Bell (not the current pub of that name), the Chequers and the George no longer exist, and the Lyon is now the Salisbury Arms; but the Swanne, now the White Swan, still shows to Amwell Street what Pevsner described as “visually the most striking timberframed inn in the district.”  The pictures, however, suggest that the timbers were covered at some stage and only restored to view during the 20th century.

Most of the surviving building dates from the late 16th century, although part of the rear wing was added in the 19th.  It was originally owned by the Sharnbrooke family, who owned other properties in Hoddesdon and Hailey, and was acquired in 1600, through marriage, by one John Bayley.  The inn, now a pub, has remained in use ever since, changing its name to the White Swan during the 20th century – although its National heritage entry as a listed building still describes it as “The Swan Inn”.

Hoddesdon town centre has many fine buildings dating back to the 16th and 17th centuries, including four current pubs: besides the White Swan and the Salisbury Arms, the Bell (formerly the Holly Bush) and the Golden Lion are fine old buildings.  Of the pubs, though, only the White Swan is listed as grade 2*, and its beautiful, elegant Tudor architecture fully deserves its status.