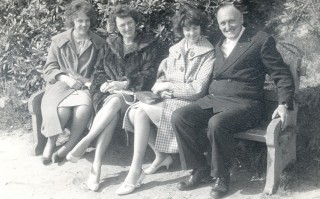 Bought egg box for new guinea pig that I’m going to have. Bought Susan D and Mary O’B a fountain pen each for their birthday. Joan came round to call for me to go to Susan’s and Mary’s party. Won orange and apple. Had easter egg for when I was going home. In afternoon, Mummy and Daddy went to see photographic prints. Sandra came round to tea with Jane and me.

Played Sandra Halifax’s records. After dinner, Daddy made hutch and run for my new guinea pig while I helped. Jane went round to Sandra’s and had tea with her. After tea had bath and his washed. Before dinner, Mr Herbert came round with photos of a girl in a girl comic competition.

Did some easter shopping. Took my best shoes to Rainbows to be stretched. Jane has now finished the front and back of her jumper she is knitting. She now has to do the collar. Mum had hair done at Litman’s.  Mum home permed Jane’s and my hair. Mum and I cleaned out larder ready to be whitewashed.

Did a bit of practice with my tennis racquet. Did skipping in back garden. Mum and Jane also did some. Went out for a car ride.  Dad took car to garage to have a new steerng box. Earned 1/9 doing ironing.

Rainy day. Did Mum’s shopping. After dinner Mum and I went to Cranborne to do the laundry. Jane wrote a composition for the GCE paper. Mum colour rinsed her hair again. Watched television and read library book.

Mum went back to school again. On television we watched Major Gagarin who has just flown round the world in a space ship and meet Mr Krushov at Moscow as it was the Russians who put the rocket up. Hilary called. Went to the Youth Arts and Crafts exhibition.