You are here: Home>Herts history>People>George Paul: A Life in Hertford>7. Printing and Marriage 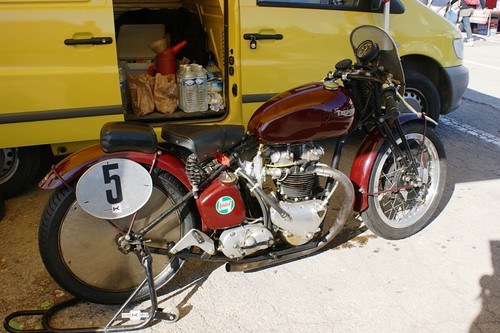 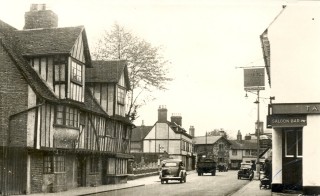 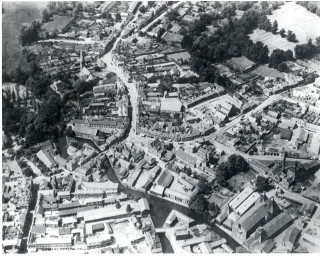 After 14 days Leave, I became once again a Civilian and started back to work as a Journeyman Printer.

As the time served in the Royal Air Force counted as part of my Apprenticeship, this meant although I had to continue at the same employers for another two years, I was paid as a qualified Machine Minder on full pay.

One of the first things I did was to purchase from my Cousin Hubert his 500cc Red Hunter Aerial Motor cycle, and for about a year ran around the Countryside and Roads on it. I had been introduced to a nice Girl from Rye Park called Sheila Clark, and took her for a ride on the Pillion, but the thing broke down and we had to push it back home.

I was not aware of it, but the oil pump was beginning to pack up, and about two weeks later, whilst doing around 75MPH along the Newmarket six mile Bottom Road, it seized up and went into (luckily for me) a straight line skid!! To get Home, I had to keep stopping and Peeing on the Engine Block to cool it down, but of course you can only Pee so Much, and in High Cross, near Ware, it finaly gave up the Ghost and stopped for good. I pushed it to a Garage to be repaired, and sold it next week for £35.00 (the same amount I paid for it) and bought from a Neighbour his maroon 500 Triumph Speed Twin, exactly the same Bike the Police were using, equipped with a spring rear hub suspension. This Bike I kept until I sold it to raise the Cash to buy Sheila a nice engagement Ring, as by this time she had become the love of my life.

Sheila and I were Married in St Pauls, Hoddesdon, with our Reception held in the Boar’s Head Pub rooms. This Pub was owned at that time by Sheila’s best friend Jill’s Grand Parents.  Best Man was Sid Gibson, a work colleague, and after the Reception we set off on Honeymoon in My works Overseer’s Standard 14  Saloon Car, which he had agreed to let me borrow for a consideration, as I had not held a Licence long enough to Hire one from a Hire company.

We spent our first night in Maidenhead, in a pub/Hotel on the  Thames riverside, and my best Man had briefed them regarding the usual French Bed operation. The next day, we proceeded down towards the South Coast, staying the first night in Littlehampton,  and then on the next day towards Worthing. On our way there, an Austin A30 shot out onto the A27 from Durrinton Lane and hit us Broadside on, sending one of our front wheels flying up into a Tree with the force of the Crash. Sheila was thrown out (no  seat belts in those days) into the road. Next thing, we were taken in an Ambulance to Worthing Hospital, where they Gave Sheila an Anti-Tetanus  jab. Another story.

One week after our Honeymoon, we were both back to work and were renting Furnished rooms with a Mrs King in Ware, but Sheila was working in the City when she became  quite ill and was sent Home (very poorly). She went to her Mothers, as I was still at work and out of touch. Her Mum was so worried about the way she was swelling up that she took her to the Doctor’s, and he sent her immediately to Haymeads Hospital, Bishops Stortford, where they found she was allergic to the Anti-Tetanus she had been given in Worthing Hospital. NB, they give it in reduced dosage nowadays, not all in one shot.

Sheila has ever since been allergic to many different kinds of skin invasions, ie Bites etc, and can suffer from Angiodema if Bitten or any other invasion of her Skin.

After a while, Sheila managed to get a secretary’s post with Ekins the Builders in Hertford, a Company heavily involved with the Building of Pubs and Schools in the New Harlow Town in Essex, and they were situated in Hartham Lane next to McMullens Brewery.

It was not too long before we found a small rented Flat in St Andrews Street in Hertford to live in and took up the tenancy.

The Flat we rented belonged to a Mrs Archer, and the building had on the ground floor a Cobbler’s called Fred Roach, and our flat was above them. As the whole Building was from around the Tudor period, it had the top overhanging the road, and all of the walls were made of Plaster and Lathes, with what seemed like horsehair inside. The Floorboards were all around two inches thick and at least two feet wide. It all tilted a little, and if you dropped anything it always rolled to the same point on the floor to be picked up! If you lifted one of them up, you could see below small corridors hidden by new Walls and full of old Papers and other things. Upstairs, behind the Chimney Breast, was a secret room with old rubbish on the floor. I believe this was what is called a Priest room. Attached to the rear and on top of Mrs Archer’s rooms was an old Barn-type Building, housing what she told us were some of the pieces of furniture and possessions that came from Panshanger House, the old Home of Lord Desborough, the man I believe who swam across Niagra Falls. Or swam across the top, which one it was I am not too sure.

I had seen once in the Shop Wackets, a Cycle Shop over the road from us, a Print or Sketch of our building dated 1640 – what a shame it’s no longer there. Opposite us were Lovels the sweet shop, Emmetts the newspaper shop, and a local Butcher’s who had a tame Jackdaw outside on a perch. This was next to St Andrews Church.

Mrs Archer’s Husband used to be an Antique dealer before he Died, and she was suffering a little with Dementia, but she had a habit of feeding all the Mice in the old Premises with little pieces of  Cheese laid down on a piece of Cardboard in the Hallway. She also had a Habit of quietly entering our front Door and creeping up the Stairs, and this used to put the wind up us a little when she popped up! So, to avoid the nasty surprises, I installed an old Motor cycle Horn push Button under the Door Mat that rang a small Buzzer in our Kitchen. We also solved the Mouse problem by buying a large Ginger Tom Cat, and he turned out to have a Batting average of around Two mice per Day, and eventually this dropped to one a month as stocks ran out!!

After we moved out, and after she had just died, her relatives came and removed all the stuff from the Barn and also the  complete contents of her rooms and burned them all in the Garden, some of which were quite valuable antiques! I do remember our Toilet was decorated all around the Bowl with a very nice Blue design, with a Mahogany seat like a shelf.