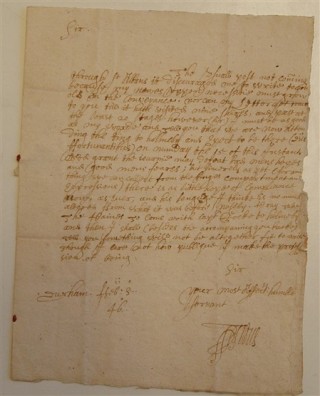 Silus Titus of Bushey and a captain in the parliamentary army, was part of the escort of the King from Newcastle to Holmby House in Lincolnshire. Following Charles being handed over by the Scots he writes to Alban Coxe from Durham as follows:

Sir, The usuall post not coming through St Albans it discouraged me to write to you because my newes upon necessitie must grow old in the conveyance. Nor can any letter come to you till it hath visited many shires, and past at the least 20 stages. However (Sir) I must be as good as my worde and tell you that wee are now attending the King to Holmeby and expect to be there on Munday the 15 of this instant. God grant the journie may defeat bad mens hopes and good mens feares; but sincerely as yet (for anything we can collect from the kinges comportment and expressions) there is as little hope of compliance nowe as ever, and his language I thinke is no much altered from what it was before Naseby. Pray take the paines to come with Captain Cocke to Holmeby and then I shall (besides the accompanying you backe) tell you something will not altogether be fit to write though I care not how publique I make the professions of being Sir, your most affectional humble servant S Titus