The Treaty of Newport 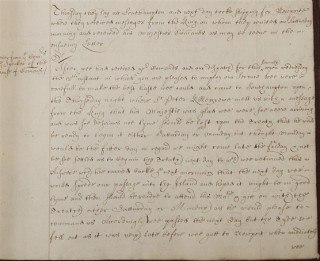 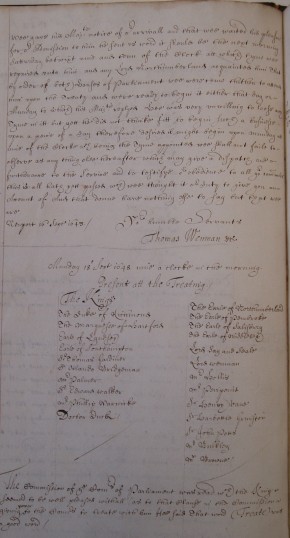 Journey to Newport, part 2 of.
Hertfordshire Archives and Local Studies

By 1646 the First Civil War was effectively over. The King had been handed over to the Parliamentary forces by 1647 and was being held at Holdenby House in Northhampton before eventually being transferred to Hampton Court. In November of the same year he escaped but was captured and held prisoner in Carisbrooke Castle on the Isle of Wight. Towards the end of 1648, Commissioners from Parliament, who included Sir Harbottle Grimston, were sent to the King in the hope that a settled peace might finally be arrived at. The propositions, which really reduced the King to little more than a figurehead formed part of what was to be known as the Treaty of Newport. Not surprisingly no agreement was reached.

The letter below describes the Commissioners journey and their initial arrangements for negotiations with the King.

This day the Comissioners sett out of London for the Isle of Wight and lay at Farnham. Thursday they lay att Southampton and next day tooke shipping for Newport where they received messages from the King on whom they waited on Saturday morning and received his Majesties Commands as may be seene in the ensueing letter.

Sir, After wee had received your commands and our dispatch for this journey upon Wednesday the 13th instant in which you are pleased to imploy our service, wee were carefull to make the best haste wee could and came to Southampton upon the Thursday night where Sir Peter Killeygrew mett us with a message from the King that his Majestie was glad wee were soe neere arriving and was soe desirous noe tyme should be lost upon the Treaty, that he would be ready to begin it either Saturday or Munday, but thought Munday would be the fitter day in regard wee might come late the Friday and not be soe settled as to begin the Treaty next day. To which wee returned this answer which hee carried back the next morning that the next day wee would speede our passage into the Island and hoped it would be in good tyme and then should be readye to attend his Majestie and goe on with the Treaty either Saturday or Munday as he would be pleased to command us. Accordingly wee passed the next day, but the tyde soe fell out as it was very late before wee gott to Newport when immediately wee gave his Majestie notice of our arrival and that wee waited his pleasure for our admission to him. He sent us word it should be the next morning, Saturday, betwixt nine and tenn of the clock, att which tyme wee repaired unto him and my Lord Northumberland acquainted him that by order of both houses of Parliament wee were come thither to attend him upon the Treaty and were ready to begin it either that day or Munday. To which his Majestie replyed hee was very unwilling to loose any tyme in itt, but yet he did not thinke fitt to begin such a business upon a peice of a day therefor it might begin upon Munday att nine of the clock, which being the tyme appointed wee shall not fail to observe as any thing else hereafter may give a dispatch and furtherance to the service and to testifye our obedience to all your commands. This is all hath yet passed which wee thought it our duty to give you an account of. And that donne have nothing else to say but that wee are   Your humble servants Thomas Wenman Newport 16 Sept 1648   Hals: XIII/50