John Wittewrongs Letter to his Mother

Joy in London and a Surprise 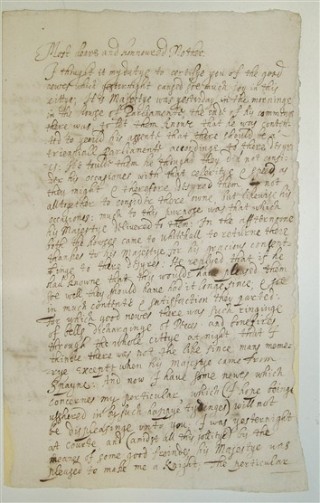 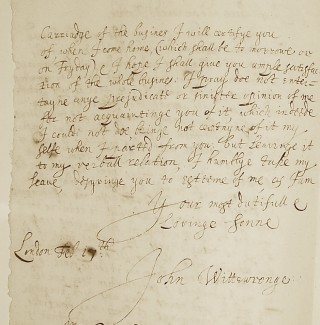 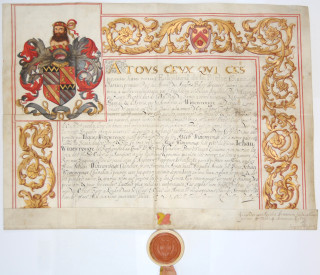 To listen to the audio clip, click play on the bar below the first image on the right.

Most deare and honoured Mother I thought it my dutye to certifye you of the good newes which yesternight caused soe much joy in this cittye. His Majestye was yesterday in the morninge in the howse of Parliament. The ende of his comminge there was to let them knowe that he was contented to yeild his assente that there should be a triennial Parliamente accordyinge to there desyres. He told them he thought they did not consider his occaisiones with that celerity and speed as they might and therefore desyred them not altogether to consider there owne, but likewise his occaisiones. Much to this purpose was that which his Majestye delivered to them. In the afternoon both the howses came to Whitehall to returne there thanks to his Majestye for his gracious consentinge to there desyres. He replyed that if he had knowne that this would have pleased them so well, they should have had it longe since and soe in much contente and satisfaction they parted. For which good newes there was such ringing of bells, discharging of peeces and bonfires through the whole cittye at night, that I thinke there was not the like since mans memerye, except when his Majestye came from Spayne. And now I have some newes which concerns my particular, which (I hope beinge ushered in by such happye tydinges) will not be displeasinge unto you. I was yesternight at courte and (amidst all the jollitye) by the meanes of some good freindes, his Majestye was pleased to make me a Knight.

The perticular carriage of the business I will certifye you of when I come home (which shall be to morrowe or on Fryday) & I hope I shall give you ample satisfaction of the whole business. I pray doe not entertayne anye prejudicate or sinister opinion of me for not acquaintinge you of it, which indeede I could not doe, beinge not certnyne of it myself when I parted from you. But leaving it to my verball relation, I humblye take my leave, desyringe you to esteeme of me as I am

Your most dutifull & lovinge Sonne