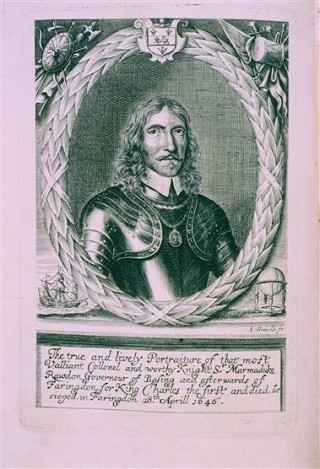 To listen to the audio clips, click play on the bars below the image on the right.  The first clip is John Venn’s letter and the second Marmaduke Rawdon’s response.

One effect of the Civil War was the strain it put on relationships. Sir Marmaduke Rawdon, and John Venn were old acquaintances, but took different sides during the war. While Venn fought on the side of Parliament and became Governor of Windsor Castle between 1642 and 1645, Rawdon felt his loyalty lay with the King. He left London for his house in Hoddesdon and shortly afterwards, on the 9 March 1643, went to join the king at Oxford. From there he was sent to Basing House. The following account is taken from the life of Sir Marmaduke as set out in The Rawdon Book, HALS 79959X.

Yours of the 15th instant I have received & for answer if I never had any acquantance with you, that courtissie mentioned in your letter, I should grant to a stranger, that is to exchange one common soldier for another, & in particular this partie, Robert Baites, though a trooper I will at your request exchange him for Warner, and If 40 or 400 more of prisoners in your power. Send me a list of them and I will procure exchange for them. Our prisons are all full of your soldiers, we know not what to do with them, besides those that run away from your garrisons. I hope you yourself will soe understand yourselfe & bad cause, that you will return repenting what you have done, but I leave that to God who hath your heart in his hand to turn at his good pleasure. I wonder how that you that hath been bred up in a protestant religion can draw a sword in the papist cause and abide in such a popish garrison. I will remember you to your old acquantance with me in Windsor, & did I know any with you, I would desire the like courtesie from you, but I know none and soe must confine my selfe to your selfe. Concluding with my prayers for peace and truth with the gospel that the kingdome of Christ may be set up in power and purity of worship, & that the kingdome of the Anti-Christ, which is the Pope, may fall to the ground. Soe prayeth.

Sir Marmaduke, although grateful, was obviously stung by John Venn’s remarks and felt obliged to reply as follows:

I returne you thanks for releasing Baites in exchange of Warner and I shall requite any courtisie from you, for I hate ingratitude. The truth is we have not at present soe many prisoners to exchange as you vainly boast of, although we have had far more and when God pleaseth may have againe, wherof will be noe bragging, being things rather to be pittied. And for any that ran from our garrison to yours, I dare boldly say there comes ten from yours to us for one of ours that goes to your armie. And wheras you say you hope I will soe far understand my self and the badness of my cause as to repent and return, I thank God hee hath given me soe much grace, that I am soe assured of the justness of my cause, that had I ten thousand lives I would spend them to the last drop of blood in this cause. And for your wondering why I that have been bred upon a protestant religion can draw a sword in a papist cause you may very well, for there’s noe such thought in mee. It’s the true protestant religion established by King and Parliament I draw my sword for, joyned with obedience and duty I owe to our most gracious Soveraigne the best of Kings, who by his gracious promise not only in speaches but in diverse printed books of his goodness, is pleased to promise it shall be maintained. So that it appears you have noe spark of charitie in you, else you would beleive him, and wheras you would scandalize me with staying in a popish garrison, its well known to all the world wee have libertie of conscience, preaching and daily reading of the book of common prayer. And although the castle belongs to my much honourd lord the Marquess of Winchester, yet as it is a garrison it appertains to His Majesty, by whose command I am here with my regiment. Now I can not choose for the old acquaintaince I have had with you, but still pray to God to open the eyes of your understanding that you may see the abhominable, horrid and infested treason you yet live in. For all the world betwixt heaven and earth (except atheists) that knows any thing of scripture knows that we ought to obey our king though he were a tyrant, a thousand times more than this mercifull benigne King Charles, who so often hath tendered his pardon to all you rebels. God forgive you and turn your heart before it is to late.