You are here: Home>Herts history>People>Nobility>The Observations of Sir Charles Cornwallis

The Observations of Sir Charles Cornwallis

The Court of Philip III of Spain 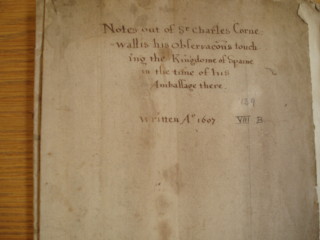 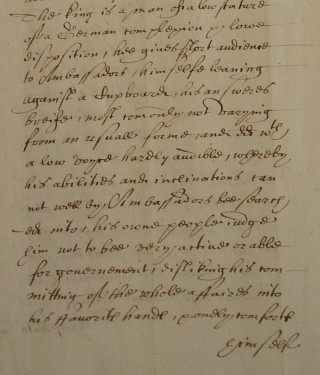 Extract: The King of Spain
Hertfordshire Archives and Local Studies 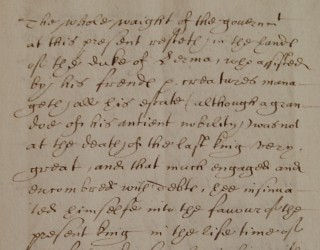 Among the many interesting documents held by Hertfordshire Archives are those that have come down through well – known Hertfordshire families, but take the reader far beyond Hertfordshire and into the wider world. The Observations of Sir Charles Cornwallis, part of the Gorhambury collection, falls into this category. Sir Charles was Ambassador to the Court of Spain from 1605 to 1607. Some of the subjects he covers include Spanish dominions, relations with other countries, defense and the church. Among the most interesting decriptions are those that relate to the King himself and the foremost of his courtiers Don Francisco Gomez de Sandoval y Rojas, first Duke of Lerma.

Although the two men differed greatly in age, they had become close during the reign of the previous King, Philip II. By the time of the accession of Philip III, Don Francisco, then Marquis of Denia, had the full confidence of the new King. Denia, who had a natural gift for diplomacy and political intrigue, was permitted to give orders and make decisions on behalf of the King regarding the running of the country. He also had the ability to placate those who were likely to take offence at his actions.  In many ways he pre-figured men like Cardinal Richelieu and the fabulously wealthy Cardinal Mazarin in being the power behind the throne. His appointments ranged from those serving in the royal households to the heads of the many councils that ran Spain and the Spanish territories in the West Indies. Appointments of positions within the church were also within his gift. It was perhaps inevitable that many of these appointees were relations and favourites and they included the appointment of his great uncle, Cardinal Bernardo de Sandoval, as Inquisitor General. Other appointments were of men of proven ability such as Juan de Idiaques a trusted advisor on foreign affairs.

It is hardly surprising that some of these appointees became corrupt. Among many of the men mentioned in Cornwallis’s Observations is Roderigo Calderon who Cornwallis regarded as arrogant and inept. As secretary to Don Francisco he was able to determine who would be allowed to see the Duke and how long they would have to wait. Calderon held other positions as well, many of which he misused. His arrogance and corruption eventually led to his downfall, and he was convicted of murder and executed in 1621.

The language used by Sir Charles in his descriptions hints at the contempt he had for many of these men and the frustration he felt in having to deal with them.

The King is a man of low stature of a German complexion and lowe disposition, hee give short audience to Ambassadors, him self leaning against a cupboard, his answers briefe, most commonly not varying from a usual forme, and did with a low voice hardly audible, whereby his abilities and inclinations can not well by Ambassadors be searched into, his owne people judge him not to bee very active or able for government, disliking his committing of the whole affairs into his favourites hands and only come for the himself with an opinion according to that which hath bin observed in the House of Austria.

More years will breed in him more ripeness of understanding and greater courage. Hee is much inclined to devotion, keeping his hours with no less strictness than if he were a votary or a man in order. Hee is very chaste, clement and liberal, his exercise is hunting, or rather fowling, and using only his gun and therein very labourious. Hee is fortunate in his issue having already in so young years two sons and as many daughters. The Eldest prince an princess are of much hope, showing arguments of quick conceite, the princess likely to bee of singular beautie, of a good witt and great spirit.

The whole weight of the government at this present resteth in the Duke of Lerma, who assisted by his friends and creatures manageth all his estate, [which] was not at the death of the last king very great, and that much engaged and encombred with debt. Hee insinuated himselfe into the favour of the present king in the life time of his father by supplying him with money and making all the demonstrations of love and service towards him, being also of a comely personage and a compleat courtier, yet of unequal age unto the King, princes always favouring those have bin brought up with them and of the same yeares. Hee is very diligent in the service of his Majesty, and hath in few yeares strengthened himselfe with alliance in the greatest and most potent families in all Spaine, besieged the King with the love and commendation of those that are about him, and hath disposed all the principall offices as well of government as justice to his owne creatures and dependants. He is attended each morning and apparelled by 8 of the Kings own pages, striving severally to doe him service. They come downe from the King[s] lodging by two and two, and so after their service done orderly return. Hee gives audience twice or thrice a week [and] those that desire it repaire to Don Roderigo e [Calderon] either by their person or otherwise. None other Secretary about the Duke daring to present any such request or receive any paper from any man. Don Roderigo put[s] these suiters names in a list, out of which the Duke selecteth those whom hee intendeth to hear, and they only are admitted into his lodge, the rest kept out by his porter, by which means many waite long before they can bee admitted, Ambassadors ordinarily a fortnight, Grandoes a month and some a quarter of a yeare.

For this so great burthen hee hath little endowment, being neither experienced in matters of state, nor in the dispositions of other nations, only hee is very diligent & [indujhious], and whereas in regard of his years hee is not fit to keep the Kinge company in his recreations, hee supplies that defect by his eldest sonne, the Duke of Cea, who is now absent but is a continuall observer of his ways, words and actions. Hee useth the help of such as are in good esteeme both of the King and of the people, as the Earle of Miranda [and] Don John de Iidiaquos, and although there are many errors committed, yet they are not all layed on his back. Hee keeps great State ingoing before the King, leaving a certain space betweene him and the other Granadoes that goe before, and in his subscripcon somewhat arrogantly writeth “yo el dagus” as though there were no more dukes but hee. To suppresseth envy that may thereby arise hee sheweth much temperance in all his life and is very affable to all to whom hee gives access, and although they receive many times denial to their suits. yet delivers it with such sugred worde that they goe not away much discontented. Hee drawes the Granadoes into his alliance, or else maketh them his owne by procuring of the King such suits, honour and immunities as standeth best to their liking. Hee hath layd a good foundation of the succeeding greatness of his house by marriages of his children into great families, and procuring them great honors and titles. He is of a timorous nature, maketh great shew of devocon [devotion] hee useth especially two secretaries viz. Don Andres de Prata [Prada] Secretary of Estate, a man very devout and affable never denying accesse, and Don Roderigo, though young and of no great learning, yet by reason of his pregnant wit and practise growne very sufficient, and to a great revenue and estate.

For a full account of the Duke’s life see: Williams P (2010) The Great Favourite: The Duke of Lerma and the Court an Government of Philip III of Spain, Manchester University Press.