From Eastbourne to Bishops Stortford 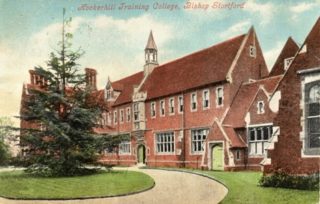 Cutting from the Herts Mercury

During a research project for the school’s radio station a group of Year 5 and 6 children from Tollgate Junior School, Eastbourne, was looking at early school log books with a school governor.  All were surprised to note a gap in the chronology between 1940 and 1942.  The final comment from the head teacher in July 1940 was “St Andrew’s School evacuated to Bishops Stortford.”  St Andrew’s School was the school’s title before the 1960s.

This prompted the children to ask questions such as “Where is Bishops Stortford?”  “Did the whole school go?”  “My grandparents and great grandparents came to this school; were they evacuated?”  “What would it have been like to be part of the school at the time?”  “Did they share space with a Stortford school or did they have a building to themselves?”  “Is anyone still alive who remembers our school in Stortford?”

Finding evidence of the move

At HALS  I had the chance to look at Herts & Essex Observer. There were lots of little items describing specific points of wartime facilities, conduct, regulations, and of course the kind of information all rural communities would have been obsessed about (the price of eggs and shortages of manual labour on the farms).  But 1940 was, apparently, a bumper year for plums!

In September 1940 there was one mention of evacuated schools from the London area in large houses which had been requisitioned for the purpose, but no reference was made to schools from other authorities.  However, there was an article on September 7th, 1940 describing the concern of the Evacuation Officer about the lack of protection at a hall being used for evacuated children.  Two similar cases were also discussed, and it was decided to write to the County Council expressing “considerable concern” at the lack of protection at the three temporary school premises.  These were not identified.  During the period August, September and October 1940 there was no reference to St Andrews School.

The text I was reading in the newspaper was misleading.  It appears there never has been a Mount Pleasant School in Bishops Stortford, so that was the first confusion, and there never has been a Detmold Road in the town.   However, the National Archives identifies a Mount Pleasant School (Junior) in about 4 locations in the UK, one of which was Hastings, close to Eastbourne.  There were several references to schools being evacuated from Hastings in 1939 (a secondary school from there came to St Albans too).  I think the Mount Pleasant School mentioned in the article was from Hastings but was allocated a non-school building (or an empty school) and did not itself school-share.  So I think that’s Mount Pleasant sorted.

There appears to be only one Detmold Road in the UK, which is in the borough of Hackney.  One of the schools on the list of participating schools in the 1942 events was a school from Clapton, a part of Hackney.  The item read as if Mount Pleasant School was in Detmold Road.  It is possible that St Andrew’s didn’t school-share but was allocated a hall or other building in or near the town, or that Mount Pleasant and St Andrew’s shared, possibly a large country house.

No published work about Bishops Stortford seems to includes the subject of evacuated schools.

HALS has a document: Evacuees Register, presumbly created so that the authority had a record of all the children it had become responsible for.  This may give details of the origin school and any school and billet the children were attached to in Bishop’s Stortford.  However, it is a closed document.

Based on previous research for other similar schools in St Albans these events were reported in the Herts Advertiser, and there were letters of thanks and appreciation to the families who received children into their homes and organisations who had run excursions, parties and other events.  No similar letters of thanks or reports appeared in the Herts & Essex Observer.  Was this an editor’s decision, or were the residents of the town not very good hosts – or the visiting schools not good guests?

Herts Advertiser  April 4th 1940 reported that the health of the 14,000 evacuee children in the county was good and there has been no abnormal health risk or higher school attendance in the school population overall than before the evacuees arrived.

In October 1941 the Herts Advertiser reported that the County Education Committee had children from 65 different local authorities in its schools.  10,000 children had come from London.  200 buildings had to be hired to accommodate them.  Given that in 1940 there were 14,000 evacuees, and assuming the numbers had stabilised, 4,000 children were from the non-London authorities, of which East Sussex was one.

Various reports appeared in the Herts Advertiser that schools evacuated to St Albans decided to return home in 1942 and 1943.  One school which had closed its original school, came to an agreement with Beaumont School, St Albans to transfer pupils to Beaumont’s own roll if families agreed and could arrange longer term billeting.

Why should they get more?

There were no references to St Andrew’s School – nor to almost any other school, whether town or evacuated – in the Herts & Essex Observer during the whole of 1941.  However, a background item from a meeting of the Bishops Stortford Urban District Council (issue August 9th 1941) had proposed the purchase of additional food supplies for the evacuated children.  This was opposed by the officer allocated to organise it, and a number of residents, who objected to the evacuees receiving more food than the town’s own children.

The same issue carried news of the publication of a government booklet titled The Schools in Wartime, published by HMSO, price 6d.

Issue September 27th 1941 carried news of Bedewell (C of E) Central School, Eastbourne, having arrived in Bishops Stortford, together with RSA exam results which were achieved.

A booklet called Hockerill College in the War Years was brief but potentially useful.  “When we returned [after the summer break] Bishops Stortford was swarming with evacuees.  Long’s Cafe was a school; all the church halls became schools; and every available house and hall took in mothers and babies.”  The College became a centre for activities for infants and juniors, with students playing a key organising and supervising role.  “Overnight came 500 children from Eastbourne.”  This contingent may  have comprised more than one school.

Given that the children had been evacuated from bombing risk on the coast, perhaps their new move was not far enough.  On the night of October 10th 1940, a quantity of bombs fell on Bishops Stortford and damaged a number of buildings.  There was no mention of casualties.

Hockerill was a teacher training college before WW2; and is currently an Anglo-European College.

So, what schools were named?

A more extensive newspaper search revealed no further references to any evacuated schools, and almost none for any town schools either until the start of the autumn term 1942 when St Andrew’s was back in Eastbourne.

But here is the full list of the schools taking part in the a) entertainment event and, b) the arts and crafts exhibition, both mentioned above.

The Herts County Council Emergency Committee at a meeting in October 1939 had decided that, where possible extra funds would be made available to hire halls for evacuated schools, to avoid the inconvenience of double shifts (school sharing).  Given that St Andrew’s arrived in September 1940, it is more likely that they had their own hired halls.

The dropping of a bomb was referred to in a recording (an oral recollection from a former evacuee of St Andrew’s).  It may have been the one which fell on October 10th 1940 when the children were thought to be at Hockerill Training College. There may be a newspaper item about it “from a town somewhere in southern England” and which only appears in the Bishop’s Stortford paper, so is likely to be that very town!

Evacuees by Mike Brown (Sutton Publishing, 2000) states that evacuation planning in 1939 included groups of London’s expectant mothers who were to be evacuated to six reception areas, including Eastbourne.

By 1940 the new evacuated areas included many south coast towns, from Bognor to Southend, as well as some inland urban areas, including Canterbury  The same book reports that, higher on the priority list than humans, farm animals (livestock) were to be removed to their own reception areas. “Animals are regarded as too valuable a resource to fall into enemy hands should an invasion take place.”

The plan that followed was to remove three-quarters of a million people over 5 days on 1,000 trains and 500 buses to new reception areas.  The plan was not carried out in full because of the harsh winter of 1940 and subsequent diversion of enemy resources towards Russia.  It is not related how many people did migrate.  The suspended plan was cancelled in November 1942.  This is undoubtedly the signal for many evacuated schools and families to return home, unless adult family members had subsequently obtained vital war work in their temporary locations.  In spite of this Eastbourne was one of the most heavily bombed populated area along the south-east coastline.