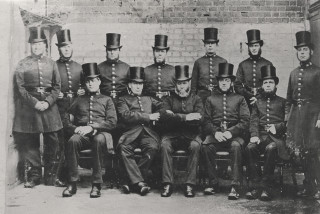 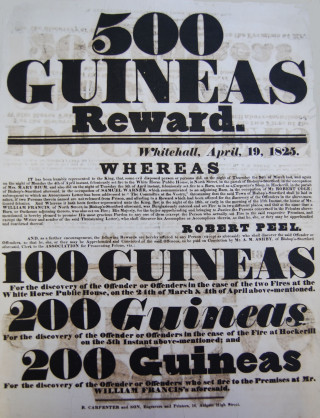 In March and April 1825, there were a number of arson attacks in Bishops Stortford, including two at the White Horse in North Street (now Pizza Express), and another at the home of Mr Francis, woollen draper. Threatening letters were also received demanding the discharge of two men, Charles Searle and William Dunnage, who had been charged with stealing rabbits. If they were not released, the letters threatened that “The flames from Bishop’s Stortford shall illume the midnight skies, and no vestige of the town be seen when the morning sun doth rise!”

A committee and a reward

The crimes caused such alarm in the district that the local police were supplemented with a contingent from the newly-formed Bow Street Runners. A number of the town’s worthies formed themselves into a committee, and offered a reward of up to 500 guineas for the apprehension of those responsible. Thomas Rees, whose father was a shoemaker with premises adjoining those of Mr Francis, was charged with both arson and sending threatening letters.

The case generated much interest, and was reported at length in a special edition of the Hertfordshire Mercury. Rees appeared in the dock dressed in ‘a green frock coat with velvet collar, light trowsers and striped waistcoat, with a white cravat, fixed by a large brooch.’ All the evidence against him was reported, from the matches found down the privy to the fact that he had been seen behaving strangely in the street just after the fire had broken out.

Rees was found not guilty of arson, but guilty of sending threatening letters, for which he was transported to Australia for life. Some recent research has discovered that he escaped from custody in Australia several times, and even got married whilst he was serving his sentence.