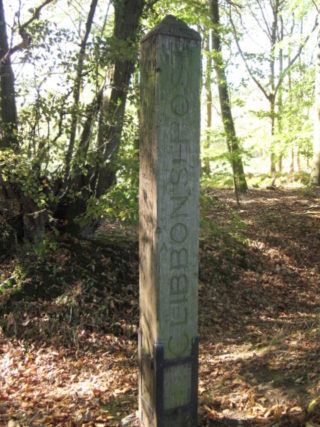 There have been several notorious highwaymen and footpads in Hertfordshire’s history. As elsewhere, the highwaymen (or women) have usually had the limelight — Robert Snooks, for instance, or the “Wicked Lady” Katherine Ferrers (though her exploits are almost certainly fiction).

Footpads, specifically those who operated on foot as opposed to the mounted highwaymen, have been seen as less glamorous. The most notorious in the county, though, was Walter Clibbon, the Pie-Man of Hertford.

Inside Information at the Fair

During the 18th century, Hertford had not only a weekly Saturday market but four annual fairs — on Passion Sunday in Lent, the Feast of St John the Baptist (24th June), the Nativity of the Virgin Mary (8th September) and the Feast of St Simon and St Jude (28th October). Fairs attracted traders, farmers and buyers from far and wide, and many of the traders and farmers set off home at the end of the day considerably richer than when they arrived.

Unfortunately, not all of them reached home with their new wealth. During the later part of the 18th century, many were set on and robbed by a gang of footpads bundled up in smocks and with faces blackened by soot. If the victim was lucky, they merely lost everything, but some, like a farmer named Kent from Bennington, tried to put up a fight and were murdered.

What baffled everyone was that only those who’d done particularly well at the fair were targeted. This gang appeared to have inside information.

It finally came to a head on 28th December 1782, when the gang attacked a farmer’s son from Datchworth who was driving a cart through the woods west of Hertford. The young man sensibly let them take his money and escaped with his life, but then headed straight for his uncle’s home nearby at Queen Hoo Hall.

The uncle, Benjamin Whittenbury, set out with the young man and a servant to track down the gang. At Oakenvalley Bottom, the three of them were set upon by three robbers. The fighting was going against Whittenbury’s group when the servant managed to get in a close-range shot that killed the robber leader, at which his accomplices fled.

Finally unmasked, the dead leader turned out to be one Walter Clibbon (also spelt Clibborn) of Babbs Green, Wareside, who sold pies at Hertford’s fairs and market. Wandering around with his pie tray had enabled him to snoop unnoticed and gain intelligence about who was doing particularly well.

One of Clibbon’s accomplices was arrested and hanged at the Lent Assize, though the other was never seen again. As for Clibbon, his body was buried by the road at Oakenvalley Bottom, with a post stuck into his grave to prevent his ghost from walking. This seems to have worked, since as far as anyone knows his ghost has never troubled travellers in the lanes around Hertford.

A more detailed account can be read in Tales of Old Hertfordshire by Doris Jones-Baker, 1987, countryside Books.