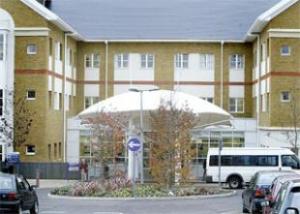 Now on the site of the Workhouse

Saturday Bridget Donnally & Catherine Mckew, two Irish Casualty women, was admitted in the Workhouse on Saturday evening with the enclosed order form Mr Tatham the assistant overseer of Finchley. However the next day finding nothing material the matter with them I filled their belly & sent them away.

Tuesday Mrs Topper who keeps Baker’s shop on the Common applied at the Workhouse on tuesday for a Stout Errand Boy. Frederick Woodhouse, Pauper of Hadley, is desirous of going but he has none but the Union Clothing.

Friday Mr Roberts & family called to look over the house on friday afternoon and was much pleased with its appearance.

Saturday William Campen aged 30, Pauper of Finchley, who was admitted in the House on Monday 15 May in consequence of Sickness having recovered was discharged from the Workhouse this afternoon at his own request. He expressed sincere thanks for the attention he had received.

Monday Mrs Grimstone of Hadley sent some tea & Sugar by her footman on Monday evening for Ann Annell, one of the inmates, and during their Conversation in the hall I herd her say to the young man she was not well used and wished someone would take her out of the Workhouse. We are not aware of ever giving her an angry word, therefore it would be some satisfaction If the board will be pleased to call upon her for an explanation.

Wednesday The Stock of Last years Potatoes will all be gone in a few days. Had we better order some old, or use them on the Ground?

Wednesday The Reading Desk in the Chapel was brought home yesterday & fitted up the following day as per order of Clerk.

Monday Mary Pedley & Jane Carpenter having been called up at 1 o’clock on Monday morning to attend the cleaning & Laying out of the Man Dolomore who died about that time, asked the Matron after Breakfast if they might send one of the boys for a glass of Gin for each out of the shilling allowed them by the board for Laying out – to which she consented, knowing the absolute necessity for it in such cases. But the Porter who was told by the boy that his Mistress desired him to fetch it refused the admittance without coming to ask the question. This is not the only instance of his unbecoming treatment which if suffered to go unnoticed may tend to Lesson that feeling of due respect and submission among the inmates, so necessary to be upheld to Maintain Proper order & Discipline.

Tuesday The woman Satchell, on leaving the Workhouse yesterday, observed to some of the inmates in the event of her husband leaving her again, she would immediately apply for admission in the house, that herself & family was never so well Provided for at home.

Paid Pedley & Carpenter for Laying out Daniel Dolomore 1/- as per order of the board.

Wednesday Ann Gray & Laura Cooper, 2 of the inmates, made their escape from the Workhouse between 8 o’clock on tuesday evening and 6 the next morning. We had no reason to complain of their conduct for several days past. They have both got the Union clothing on.

Wednesday Willis the Porter came into the Kitchen on Wednesday while we were serving out Dinner and abused me & the Matron shamefully, in fact he disturbed the whole house because the Plate in which I sent his Dinner did not suit him.

Thursday Ann Gray & Laura Cooper was brought back to the Workhouse by three Policemen between 6 & 7 o’clock on Thursday evening. We locked them up separate. Gave them Bread & Water the following day as per order.

Friday The enclosed note from General Dickins was sent to the Workhouse on Friday morning. I returned the following answer,

I am sorry to say my instructions from the board

prevents me from complying with your request by

Permitting the woman Davison to go out of the

house. I have directions to let her husband see her

if he calls at the Workhouse.

Friday Davison’s Sister called at the Workhouse a second time & wishes me to let the Woman Davison go out for the day, but I still refused.

Saturday The Medical Officer visited Ann Gray & Laura Cooper in their refractory wards on Saturday forenoon & asked them, If they would like to have Gruel instead of Water. They said, If any one brought them Gruel they would throw it in their face.

Saturday William Davison applied at the house on Saturday afternoon for Permission to see his wife. Leave granted as per order.

Monday Richard Flint, Casualty Pauper from Finchley, was discharged from the Workhouse on Monday Morning, order Relieving Officer. Was obliged to send him out in the Union Clothing having no others to put on him.

Monday William Davison applied at the Workhouse on Sunday afternoon after Divine Service for Permission to see his wife which was granted.

Tuesday Ann Gray was committed by the Magistrate to 2 Months hard labour, for going out of the house & selling someof the Union Clothing. By her own Statement this makes the 13th time shes been in confinement & only 23 years old.

Tuesday William Davison called at the Workhouse on Tuesday afternoon & was in conversation with his wife some time.