by Sami, aged 33, from Stevenage 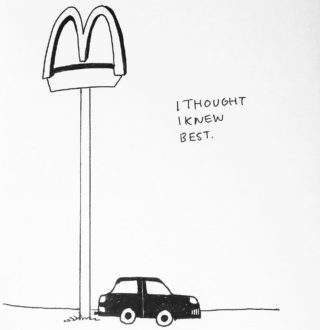 As a young teenager, I didn’t really fit in. I wasn’t one of the popular girls – I wasn’t into clothes and makeup, I still wanted to play games in the playground and the friends that I had were considered “misfits”. One of them still wore long socks and had a Forever Friends backpack. Another always had greasy hair. The popular kids looked down on us and I was a target for bullies.

My home life was ok, but I didn’t have a good relationship with my dad. He was an alcoholic and because of this, we never had much money. My mum had to work hard to support me and my older brother, and she tried her best, but she was never able to provide us with things that would have helped us fit in – Adidas trainers weren’t a priority when they were blacklisted from the bank. Mum and dad used to fight and scream at each other. One time, dad threw a frozen chicken at my mum – luckily it missed her, but it made a huge dent in the door!

Boys at school never noticed me, but I started to become interested in them, and when I was 13 I started dating a guy who was 23. He had a car and used to pick me up from school. No one batted an eyelid – how different life is today! I used to sleep over at his house, and his parents never questioned it, even after they found out how old I was. I lost my virginity to him on my 14th birthday.

Around this time, my family got the internet. I would spend hours on chat sites, talking to strangers and finding out about the adult world. Older men showed interest in me, and it was exciting. I would lie to my mum and go out and meet people, convincing myself I was safe because I gave my brother their telephone number.

I’d meet these men in places like McDonalds – it’s a public place, so it had to be safe, right? But then I’d drive off with them in their cars. Once I travelled five hours on a train to Exeter to meet a 23 year old, telling my mum I was babysitting in a nearby village. Looking back, I realise how lucky I am that nothing really bad happened to me; that I’m still alive. The attention was nice, different from the life of bullying at school. Not having a great relationship with dad meant that I was often looking for a father figure to fill that role. I didn’t realise it then, but looking back it’s clear.

I started hanging out with a different crowd. We’d get people to buy us alcohol and most of them smoked. We hung out in bus stops and car parks, and met boys driving past who would stop and hang out with us. We’d usually tell them we were older – my friends could pass for 17/18, but I still looked about 12, so I would pretend I was 15.

There was such a huge part of me that was desperate for a little brother or sister, but my mum got sterilised and that wasn’t going to happen. I was so broody all the time, all I could think about was babies. I decided to have one. I told my best friend and she tried to talk me out of it, but I had my mind set and I was very stubborn (I still am!). I thought I knew best, and I kept imagining all the cute little outfits, the cuddles and the love a child would bring me.

The very first time I had unprotected sex, I fell pregnant. This was in March 2000. The father was one of the men we met when we were hanging out in bus stops. He was 19 and I was 14, and he knew how old I was. He didn’t seem to care about that, or care about using protection. Some of my teachers weren’t very nice about my situation, but the bullying stopped and other kids at school were curious. My mum was horrified and wanted me to have an abortion, but I dug my heels in, and eventually, she accepted it.

After the summer break, I didn’t go back to school. I had tutors at home for Maths, English, Science and French. They were really nice but I felt isolated. In December, my son was born. I’d been looking forward to it, but I wasn’t prepared for the pain, the agony of childbirth, made worse by my under-developed 15 year old body. The months that followed shattered my illusion. It was so hard, I was always tired and there was never enough sleep. I went back to school to take my GCSEs. I had always been a pretty good student and I did well with a A, four Bs and a four Cs.

My son was hard work. He was sick a lot and dribbled constantly, ruining every outfit (his and mine). When his teeth came through, he started biting. Everything and everyone. Mums groups stopped inviting me, as their children were always left with teeth marks. My parents helped out a lot, but the father never had anything to do with him – to this day they have not met, and my son is now 18.

School was traumatic for my little boy. He didn’t fit in either, and was always in trouble. He seemed so different from the other kids, and at the age of 9 he was diagnosed with Autism and ADHD and a year later with epilepsy.

It hasn’t been an easy ride and I’ve had to constantly fight for everything. I wouldn’t change my past as it’s made me the person I am today, and I’m doing pretty well! I’m saving for a house and I have a good job, but it’s taken a while to get here, through heartache, frustration and many, many tears.