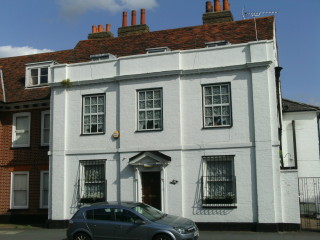 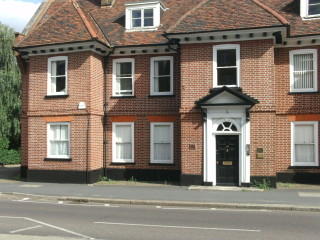 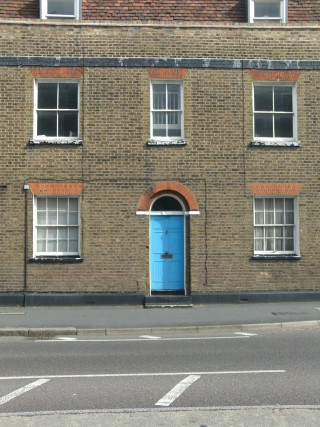 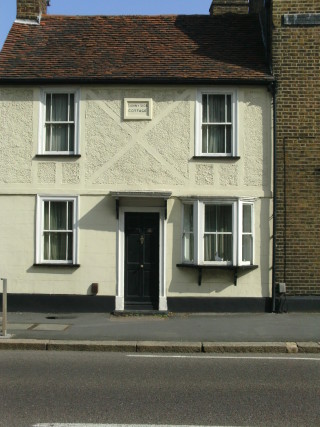 The section of Cheshunt High Street north of Cadmore Lane was almost totally redeveloped during the 1960s, its various houses, shops and pubs replaced with modern blocks of flats and maisonettes.  The one island that survived from an earlier time was a group of four houses on the east side, 138-144, all of which date from the 17th-18th centuries – all four are grade II listed buildings.

I have to declare an interest, that number 138, known as Hillview, was a place I knew very well as a child, since my closest friend lived there, and I knew it almost as well as my own home.  Hillview is described as having an “early C19 front to C18 or earlier range”, which more or less fits what I was always told, that it was a Queen Anne building.  A substantial two-storey family house, together with attic and cellar and extensive grounds, it was at that time a doctor’s house and surgery, in the days when many doctors operated from their own homes. It was occupied then by Dr Watts – previously it had belonged to Dr Clark and Dr Trounce, and subsequently to Dr Ahmed. The surgery was a room with entrances from the house and the driveway, while the waiting-room was in the stable range opposite.  In bad weather, having to cross between waiting-room and surgery could be something of an ordeal.

The place was a child’s paradise – passages linking rooms, a door behind which lay the stairs to the attic, and a “secret passage” from the basement to outside.  I was almost adult before it occurred to me it had actually been an unused coal-hole.  The gardens ranged from formal lawns to a half-wild section, but most of this was subject to a compulsory purchase in the 1960s to build garages.  Since Dr Ahmed’s retirement, the building has been turned into offices.

Number 140, Beechholm, is a late C17 red-brick building with a C19 gabled addition on the north side. In the 1911 census, it’s given as the home of the spinster sisters Emily and Emma Boyd, both in their sixties and described as having “private means”, along with a sixteen-year-old maid, but during the 1950s and 1960s it was in use as a hotel.  I remember often wondering what call there was for a hotel in Cheshunt High Street (this was long before the Lea Valley became an attractive tourist site) but I presume it was used mainly by commercial travellers.  When I remember it, the hotel was run by a Polish man and his British wife – I knew their children, who used their father’s first name, Lech, as their surname, rather than the somewhat long and complex Polish name.  Beechholm too is now offices, and a modern development, known as Beechholm Mews, has been built behind it.

Number 142, The Orchards, is perhaps the least interesting of the buildings in architecture – the official listing description says that it’s “included for group value”.  Nevertheless, it’s a late C18 brown-brick building, with two storeys and an attic. In 1911, it was home to a couple called George and Barbara Paul. He’s described as a Nurseryman, but it’s unlikely this meant he was a nursery labourer. The Pauls owned one of Cheshunt’s most important nurseries, and the couple employed a domestic servant. At the time Beechholm was a hotel, The Orchards was used as an annexe.

Number 144, Sunnyside Cottage, is also included for group value, but is maybe the prettiest of the four buildings.  Described as “mid C19 front to earlier building, probably C17 timber frame”, it’s painted white with an imitation half-timber pattern, and has always seemed to suit its name. In 1911, a couple called James and Isabella Matten lived there, with their youngest daughter and a lodger — James was a labourer.

Though none of these buildings has outstanding historical or architectural interest, they form an attractive group – even as offices and with modern development around them – which gives a taste of what this part of the High Street was like before 1960s brutalism took over.