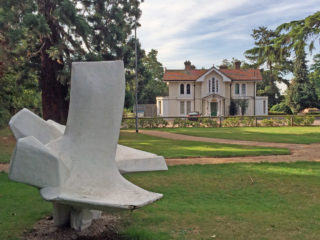 At the south end of Hoddesdon High Street, a little way past Lowewood, stands a lovely Swiss Cottage style building surrounded by public gardens. Called the Italian Cottage when it was built, it’s better known as the Spinning Wheel and has fuelled a surprising amount of controversy in recent years.

The Italian Cottage to the Spinning Wheel

It was built in 1870 * by Septimus Warner, son of the Quaker businessman and philanthropist John Warner, who lived there until around the turn of the century. Early in the 20th century, it was sold and opened up as a road house, catering especially for cyclists — hence its name, which has nothing to do with textile working.

According to its listing, the Spinning Wheel is

In the 1930s, the Spinning Wheel opened a private swimming pool in its grounds, which was ceremonially opened by the actress Violet Tree, whose son David Tree later lived at The Baas in Broxbourne. Initially, this was for members only, although the County Council paid for local children to visit once a week.

A few years later, a campaign began locally to have a public swimming pool in Hoddesdon, and eventually the Spinning Wheel pool was bought by Hoddesdon UDC and opened to the public. One councillor expressed the rather enlightened view that

Initially, the pool was somewhat small and had only the most rudimentary facilities, but in 1954 it was extended to 25 yards and given better changing rooms and toilets. I remember going there in the 1960s, but only occasionally (my local pool was Cheshunt) and I don’t have very clear memories of it, unfortunately.

Following the opening of two local indoor pools, the Spinning Wheel pool lost some of its popularity and was allowed to deteriorate. Nevertheless, it remained open and fiercely supported by many local people till 2012, when the council closed and demolished it. Ironically, they had just conducted a “Big Society” poll asking the people of the borough which non-listed buildings should be preserved and restored. Coming top of the poll, however, wasn’t enough to save the swimming pool.

The site of the pool is now the Diamond Jubilee Memorial Gardens. However, there’s no sign that it’s widely used.

In the meantime, the Spinning Wheel road house had closed down, and the building was used at various times as flats and offices. The last tenants moved out in 2017, and the following year the council announced plans to allocate £100,000 in the building’s restoration.

It’s not clear, however, what use the Spinning Wheel might be put to. In 2018, the council was considering moving the borough museum into there from Lowewood, but in recent months the museum’s future has hung in the balance. At time of writing, it seems more hopeful, but it seems less likely that money will be invested in it.

Whatever use is found for it, it’s to be hoped that this lovely stucco Swiss Cottage at the southern end of Hoddesdon will continue to be visible to the public, if not actually accessible.

* There’s some uncertainty about the date, since one source refers to it being built in 1849. However, it’s conspicuously absent from a survey of High Street buildings during the 1860s.