The Journey We'll not forget in a Hurry 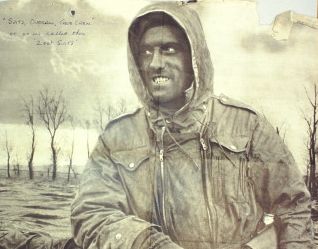 Couzins in his Zoot suit

To listen to the audio clip, click play on the bar to the right.

We moved from Falmignoul about noon on the 2nd and started a journey we will not forget in a hurry. The roads were covered with ice which was half thawed when we started but very soon froze again. The first spot of bother was on a slight hill, we were going up alright, with one track on the verge, when the S.P. in front, ‘F’ SUB slid into the ditch and when they backed out started waltzing all over the road. They backed into a field, but the tracks scraped the rough surface from the grass, and left a smooth slippery surface and they skidded & turned while we all watched and laughed. As she waltzed we sang waltz tunes and shouted insulting remarks.
When we attempted to start up the hill again the laugh was on us, the tracks slowly churned round and the S.P. never moved. We started by throwing dirt under the tracks and slowly made our way up to await the others. As soon as possible we left the road and went cross-country, it surprised me how tanks weighing something like 24 tons spun on corners like a stone on a pond and the surface was an ordinary field. Once we came over a crest, the road curved round to the right and we were cutting across to join it where it crossed a bridge. The ground in front sloped down to the road forwards, and down to the river, to our left. Thus we had two chances of turning turtle, forwards over the road and over the edge on the other side, and to the left into the river. One touch of the steering tillers was all we needed to start the skid and I was ready to jump clear as there would have been no future in staying aboard. We managed it without trouble however and had a nasty moment crossing the bridge for I expected to skid into the low wall and drop 20 feet into the river. I needn’t have worried because at the next bridge over a river she slowly slid from the crown of the road and hit the 2’ 6” wall broadside on, all 24 tons of her. Well, I needn’t say that the wall held and we completed the crossing scraping against the wall. Further on we came to another bridge and as we started over I turned to the G.P.O.1  and said “That was a nasty moment on that bridge.” He said “Yes, and we’re doing it again” As ‘I eyes-fronted’ she bashed into the wall and I’m sure my hair stood on end.
So we went on and finely the G.P.O1 said he would walk ahead and see if we would be able to do the rest of the journey.
While he was away a jeep crashed into us and threw a man out, a Yank who had escaped from the Germans. He spoke like a German and if it hadn’t been that his mate was American without a doubt, I should have inquired into him, it was dark by that time and stranger things than enemy vehicles wandering into our lines have happened.
The G.P.O1 came back and said he thought we could make it, and after a few miles we met the B.S.M.2 who took us to the position. As we had been on guard the previous night we were allowed to sleep in an empty house nearby and leave the gun out of action. That night we all had stacks of letters, the mail had caught up.