How Couzins came to be in the Invasion, part 2 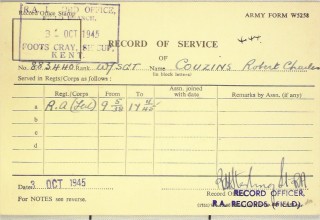 March 1944 found us wondering when the day was, on April 6 I went on leave, the last one for a long time. On April 14 we left billets and went out on manoeuvres, living in the open. At the beginning of May we went into a canvas concentration camp and started water proofing for ‘D’ Day.

We made one false start to keep Jerry guessing and came back.

Then came the ‘Briefing’, we were shown maps with all the names in code and learnt the roads we were to use, where the minefields were, and the first objective. Aerial photos taken of our beach showed curtains at the windows, and mined sea-obstacles, photos taken only a week before.

Still we didn’t know where we were going, they wouldn’t ever admit it was France.

On the Saturday June 3rd we went to Southampton and waited in a street for our turn to load, a jeep mounting a loaded Browning patrolled up & down to make sure we did not speak to civilians.

We loaded about 3 pm and stood out in Southampton Water . On Monday we joined other formations of craft and in the evening were wallowing our way across the Channel. Before it got dark we saw the whole sea alive with ships, cruisers, destroyers etc. keeping a watchful eye on the big brood of Landing Craft slopping along on their flat bellies at 8 knots.

We went to sleep by the guns that night knowing we were landing on the Cherbourg Peninsular near a little town called Arromanches, more accurately the village of La Riviere.

At dawn June 6th I looked for our companion ships and they were still there, ploughing along with us. Just before we started firing a dark cloud on the horizon gradually became land, France. Then we started “Fire by order, 4 rounds Gun – Fire!” Fire! I opened the breech and rammed shells till the sweat ran off, every time the gun alongside me fired I felt the flame on my face untill I got so dizzy I didnt know when my own gun fired, I had to watch it slide back to be sure. Two other guns behind firing over my head didnt help.

Everything was letting loose all it had, and big black clouds of smoke noiled across the ground behind the beach. The infantry boats were rolling & pitching horribly, going right out of sight for half-a-minute a time.

As we got nearer, the Rocket Ships went off with a peculiar noise that made me jump, and houses collapsed in piles of rubble. Overhead our planes swept back & forth with no opposition, too big spouts went up to our left, enemy shells, phew!

As we nosed in to land I went to the lowered ramp and watched the obstacles, I was first tank off and didn’t want to bump a mine. The tide was coming in fast and the obstacles were disappearing, we were drifting too so that when we grated ashore of grounded, I couldn’t see a thing. There were about 50 yds of water to wade through before we got on the beach and also mines, but as luck would have it we never hit one. “Turn left on the beach and look for the Troop Leader,” “OK,” I ran down the beach with the tank behind and found out when I was to go into action. I faintly remember bodies prisoners and a man in a tight fitting rubber suit (These were “FROGMEN”) who had been diving for mines. The beach by this time was no wider than 30 feet, and as I swung right on to the line of fire the extra ammo container I was towing fouled the tracks, so I cut it adrift. Two officers shouted at me to move the tank as I was blocking the track, I told them to go to —– see the G.P.O. After one target we moved, I tried to pull out a Sherman stuck in the sea but the rope broke, I had to leave him. The beach exit was blocked and bulldozers were working on it, while I waited a Landing Craft drifted on to me and ground a big dent in the tool locker then it drift away only to crash back again trying to lift the gun out of its sockets with its ramp. I went mad winding the gun up & down trying to save the gun. Soembody shouted to me to be careful if I backed because there were two mines behind the track! They were like two beer bottles wired to a big log and as I jumped down to have a look, an officer gave me some wire cutters and said “Cut them clear, you’ll get the M.M.1” I don’t know what made me do it but I handed them back and said “You cut ‘em clear, you’ll get the M.C.2” He tried but couldn’t, so I decided to risk the tank turning in time to miss them, meanwhile the Craft was banging away at the front.

The only man left on the tank was the wireless operator, the rest had dismounted, the W.O. was scared of mines but he could drive, so “back right stick”! We missed the mines by inches and then off up the road to join the rest. They were in action by a Troop of four German guns in concrete emplacements, the guns were undamaged but deserted, where the gunners were I’ll say later.

The end of ‘D’ Day found us quite a few miles in, the woods were full of snipers, for the next few days they came out in hundreds, ‘persuaded’ by flame-throwers. The frist time the W/operator got off the tank was at the end of ‘D’ Day and he jumped straight on to a metal disc 6” wide which I had thrown away, his face was a study! He looked up and said “A mine!” but didn’t try to get off, poor old Jeff was always in trouble.

So we started off in France, the luckiest men alive!

Afterwards we were told something about the beach we didn’t know, an 88 mm gun was still firing 4 hours after we had passed, Spandau’s were still manned and the gunners of the four big guns were in dug-outs 20 feet below for hours after we left!

Every night Jerry planes plastered the beaches but we were safely inland by that time, it was a long while after when we had a first bombing, about 7 weeks after D’Day.

The war was very pleasant then, lovely weather to camp out in and no rubbish coming back at us, we enjoyed it for weeks untill in the fighting for Tilly3 we had to fire big fire planes and lump ammo all day.