The Diaries of Henry Lomas, April 1826 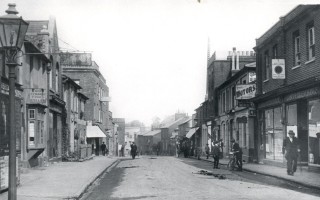 The new Road at St Albans opened called the Verulam New Road. This will avoid many declivities and short turnings of the old Road and be a saving in the distance of nearly half a mile. A new Inn erected on a very large scale on this road contracted for by Cupid Builder of Grays Inn Lane.

1st  Mr Green the aeronaut made his forty eighth ascent accompanied by the Brother from the Eagle Tavern Tea gardens, City Road. The balloon ascended in a majestic style to the perpendicular height of 200 feet and descended without any difficulty at Barking in Essex.

10th  A shocking accident happened in the Parish of Rickmansworth. The brother of Mr Bagot at Money Hill while attending the Brewing slipped into the mash Tun at the time the hot liquor was running in from the Copper and so deadfully scalded that he survived but a few hours.

18th In the House of Commons Mr Whitmore brought forward a motion for the repeal of the corn Laws which was rejected by Ministers on merely temporary grounds and finally rejected by a Majority of 250 to 80.