The Diaries of Henry Lomas, March 1826 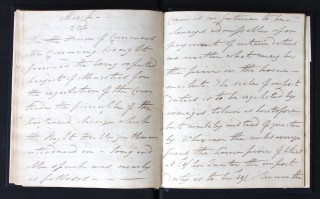 2nd   The assises at Hertford commenced before Chief Baron Alexander and Baron Graham. A cause was tried Johnson versus Young both drapers of Watford for an assault. The plaintiff had a Verdict of ten Pounds with costs. There were in this cause some hard swearing. A Man of the name of Ford was tried at these assises for the Murder of a fellow Labourer at Chorley Wood.

They quarrelled on a Sunday afternoon in a Public House and went out to fight. The prisoners opponent received a violent blow on the head which caused his death. It was stated at the trial by witnesses that the prisoner fought very unfair. He was found guilty of Manslaughter and sentenced to three months imprisonment.

An enormous Elephant the largest ever known in this Country. It was five years old when brought into this Kingdom which as stated by Mr Cross the proprietor is seventeen years ago and he had been offered one Thousand Pounds for it when living, was shot at Exeter Change. He had shown symptoms of irritation which might have proved dangerous. One hundred and fifty two balls where fired into him before he could be killed. His carcase was dissected by Dr Brooks and other eminent Gents. It weighed between five and six tons.

The Slave question occupied the attention of both Houses of Parliament with universal unanimity in a detestation of Slavery and resolved to adopt measures for its amelioration.

Died this Month Mr Millers Mother, a Mrs Fisher, and Mr Plaistow of Rickmansworth. He died by his own hands. He cut his Throat and immediately sprang into the river that passed his House.  Embarrasment was supposed to be the cause.