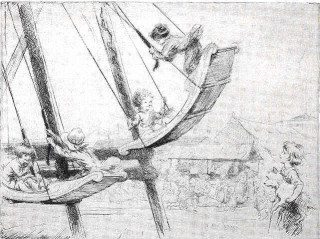 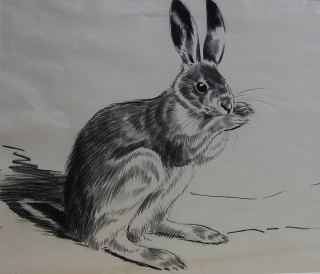 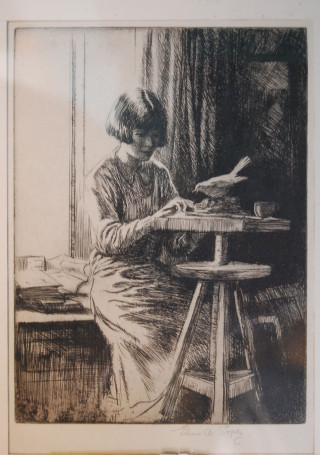 Eileen was born in Enfield in 1905, the daughter of Ada and George Soper. Her father was a famous etcher and engraver and was responsible for his daughter’s artistic training. Her sister Eva, who she lived with all her life, was also an artist whose ceramic figures of birds and animals were commissioned by Royal Worcester.

When she was three, Eileen and her family moved to a new house that her father built in the ‘wilds’ of Hertfordshire at Harmer Green. The house was called  ‘Wildings’ by Eileen, when she and her sister inherited it. She lived there for the rest of her 81 years and the garden, or more particularly the garden’s wildlife, was to have as profound an effect on her life as her father, the other great influence.

Eileen seems to have been something of a tomboy and she and her sister made full use of the opportunities that the large garden offered them. She attended Hitchin Girls School, although didn’t seem to have particularly relished the experience. In her late teens she learnt to drive and was a skilled mechanic. However the aspect of her life which set her apart from her contemporaries was her talent.

She was artistically precocious and hardworking from a young age. Portraying children in an unsentimental way was her speciality. Possibly this clear sightedness was because she wasn’t much more than a child herself. Eileen had two etchings of children at play shown in the Royal Academy Exhibition when she was 15. By that time her work had already been shown, and created a stir, in America. She was the youngest ever exhibitor at the Royal Academy beating two earlier prodigies, John Millais and Edwin Landseer, who had to wait until they were 16 before their work was hung there.

In 1924 her etching ‘Flying Swings’ was purchased by Queen Mary from the RoyalAcademy. A cousin wrote to the Sopers in May 1924 ‘We indeed share the honour, but are only little microbes compared to you’. This was possibly not the smartest comparison, as George Soper had a morbid fear of germs and the ‘dread disease’ which he passed onto Eileen and Eva. This fear came to affect their lives, leading them to become odd in their behaviour and very reclusive in later life.

Eileen’s etchings sold well though the 1920’s until the end of the ‘Etching Boom’ in the Great Depression of the 1930’s. However that decade saw her career as an illustrator build steadily and then finally blossom when she began to illustrate books for Enid Blyton, in particular the Famous Five. Knowing some of Eileen’s background one wonders if her early tomboyish exploits helped inspire some of these drawings?

She and Enid Blyton seem to have had a professional relationship through the 50 books that Eileen illustrated over 20 years. They only met a few times, although many letters passed between them. Enid Blyton thought Eileen was very efficient and a good draughtswoman. Eileen thought Blyton a bit of a menace, because like many authors she wanted changes to drawings for no good reason that the illustrator could see.

Possibly because of this, or possibly because Eileen had always had a love of words, she began to write her own books. By this time she had left the exploits of children behind and was to concentrate on animals and nature, much of it inspired by the garden and its inhabitants at Wildings. Her first book was ‘Happy Rabbit’ in 1945, but a slightly later one ‘Sail Away Shrew’ once again saw Queen Mary making a purchase. Interestingly Eileen was as demanding of her publishers as any author had been with her about their illustrations. Sadly her writing ability was not of the same standard as her art, particularly her poetry.

She and her sister, from the 1950’s onwards, were increasingly in thrall to the wildlife of Wildings. ‘What a nuisance a soft heart can be, particularly when it prevents us from setting the necessary mousetraps.’ They didn’t just have mice, but bossy birds that would attack the contents of their sitting and bedrooms to acquire nest making material. The only animal they seem to have deplored was the cat, because it was rather less tolerant of the birds than they were. In later years Eileen put some of this experience to good use in books about several of her favourite animals including badgers, foxes and the muntjac deer. She even appeared on a February edition of the children’s programme Animal Magic, 1963, showing the tame birds feeding from her hand.

She and Eva continued to live in the increasingly decrepit Wildings, until they both had to go into hospital and then a nursing home. Eileen finally agreed to an upgrade of the house so she could go home, but sadly died in 1990 before this could happen. Her sister Eva (following a brief spell out of her sister’s shadow) blossomed, but she also died in 1990.

For more information on Eileen Soper and Wildings there is an interesting book ‘Wildings: the secret garden of Eileen Soper’ by Duff Hart-Davis on which most of this article is based.

For more information about her as an artist and a range of her etchings see http://www.chrisbeetles.com/