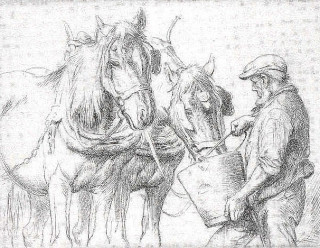 George Soper was born in Devon in 1870. He was mostly self-taught, but he exhibited his first painting at the Royal Academy in 1889 when he was 19. This signalled a life long association with the Academy, where he exhibited almost every year for the rest of his life. He also exhibited at Walker Gallery, Liverpool, the New English Art Club and the Royal Scottish Academy amongst many others.

He had a talent of for drawing people in action which was put to use in illustrating books, book jackets, magazines and journals in the late 19th and early 20th century. As well as providing images for the dashing tales of Empire, that were popular in the pre-World War I period, George illustrated many classics including Alice in Wonderland, and the Water Babies. However as he grew older, his main subject became the land, and the men and horses who worked it; much of which was based on local Hertfordshire scenes. So well known was he for this later work, his earlier career came as a bit of a surprise when researching this article.

He married Ada Lehany in 1897 and their two daughters Eva and Eileen were born in 1901 and 1905 respectively. In 1908 they moved to a house George helped design in Harmer Green (this house became know as Wildings when his two daughters inherited it years later). George had a strong interest in wildlife, and a particular interest in ferns. From the outset the grounds of the house were intended to accommodate a wide range of fauna and flora.

When World War I broke out in 1914 George volunteered but was rejected on grounds of a weak heart. However he contributed to the war by harnessing his skill at drawing people in action, through illustrating articles on battles and warfare.

From 1916 to 1920 he studied etching under Sir Frank Short at the Royal College of Art. He passed these skills with great effect onto his younger daughter Eileen.  Her reputation was to eclipse her father’s and her engravings were first shown at the RoyalAcademy when she was 15. George worked extensively as a printmaker during the print boom of the 1920s, influenced by printmakers such as Whistler and Sir George Clausen. He became a Fellow of the Royal Society of Painter-Etchers and Engravers in 1920 which must reflect his skill as an engraver based on his years as painter prior to 1916.

After ‘Etching Boom’ ended in early 1930s, George was involved in a range of artistic work which often saw him working closely with Eileen and Eva. Like Eva he modelled figures for Royal Worcester, although his were of horses rather than birds. This period also allowed him to concentrate on showing the land in a time before mechanisation and urbanisation began to affect Hertfordshire. He was a master of portraying horses, especially those working on the land.

George died in August 1942 aged 70 and his daughters stayed true to his legacy both good and bad. Whether it involved a deep devotion to the garden wildlife, their artistic training or his morbid fear of germs his daughters continued to follow the path he set them on.

He seems a much more shadowy figure than his younger daughter, despite his great talent, and the two are still often linked when discussing them as artists. For more information on George Soper have a look at ‘Wildings: the secret garden of Eileen Soper’ by Duff Hart-Davis on which much of this article is based.