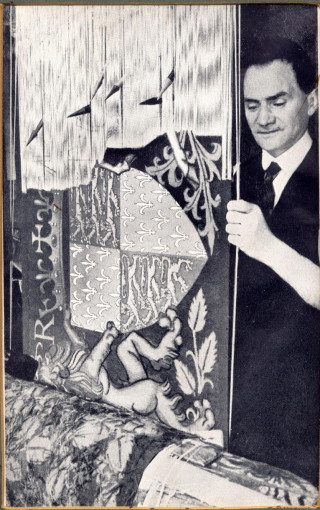 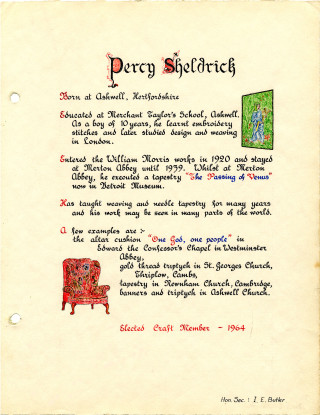 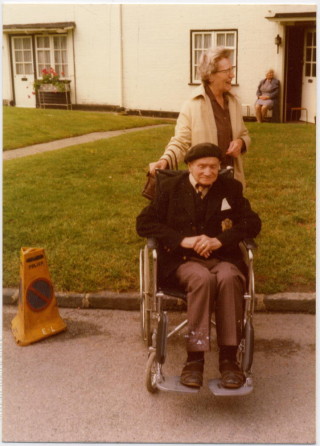 One of the Welwyn Craftworkers Guild members it was possible to find out more about was Percy Sheldrick who lived in Ashwell.  Born in 1891, Percy was 10 when he was taught embroidery by a Miss Pearce of Ashwell. When he was 18 he exhibited an embroidered banner called ‘The Good Shepherd’ in London which won a certificate of merit. Embroidery was an unusual skill for a young man to have in the early 20th century and I should think especially so in a rural community like Ashwell.

Like most men of his generation he fought in the First World War. He served with the Herts and Beds regiment and fought bravely in the trenches. Eventually he was severely wounded and discharged from the army. In 1920 Walter Taylor an ex-employee of Morris and Co set up the tapestry department at the Central School of Arts and Crafts. A number of places were reserved for ex–servicemen and Percy was amongst the first to be recruited.

The tapestry workshop at the Morris works at Merton Abbey was re-opened in 1922. Percy joined the department, as a weaver, after three years of training with Taylor. He eventually reached the position of Master Weaver and stayed with the firm until the workshop’s closure in 1939. The Morris works finally closed in 1940, after some years of decline.

The first piece Percy worked on was ‘The Passing of Venus’ based on a design by Edward Burne-Jones. The original tapestry had been destroyed in a fire at the Brussels Exhibition in 1910. This later version was commissioned by George Booth of Detroit for the Institute of Arts. The tapestry cost Booth £2000, was 9 foot by 20 feet and took nearly four years to complete. The tapestry was the last one produced by the Morris works using vegetable dyes, as the source plants were no longer being commercially cultivated. In his long career Percy also worked on the ‘Last Supper’ for Sir Thomas Beecham and on a tapestry map of South Africa for South Africa House.

One of the last commissions saw him working on a huge triptych of panels for the spectacular Lancing College Chapel in West Sussex. Each of the three panels took eighteen months to complete. They were designed by Amy Akers-Douglas, Lady Chilston, and were the final tapestries woven at the Merton Abbey works. The panels still hang in the place they were commissioned for, behind the chapel altar, and can be admired by the public when the building is open to visitors.

After his time at Merton Abbey, Percy was employed in a clerical position in Letchworth, although his textile work continued. He worked both as a practitioner and teacher and in his later years an exhibition of his work toured in the United States. In 1959 the William Morris Gallery published his article ‘Information on Morris and Company at Merton Abbey’.

One later piece, an altar cushion, was made for Westminster Abbey’s 900th anniversary in 1966, as a gift from Ashwell. This was displayed in Edward the Confessor’s Chapel   Percy’s work can be seen in the churches at Ashwell, Newnham, Baldock and Thriplow in Cambridgeshire. Ashwell Museum has a number of pieces of his work as well as a great deal more information about him.